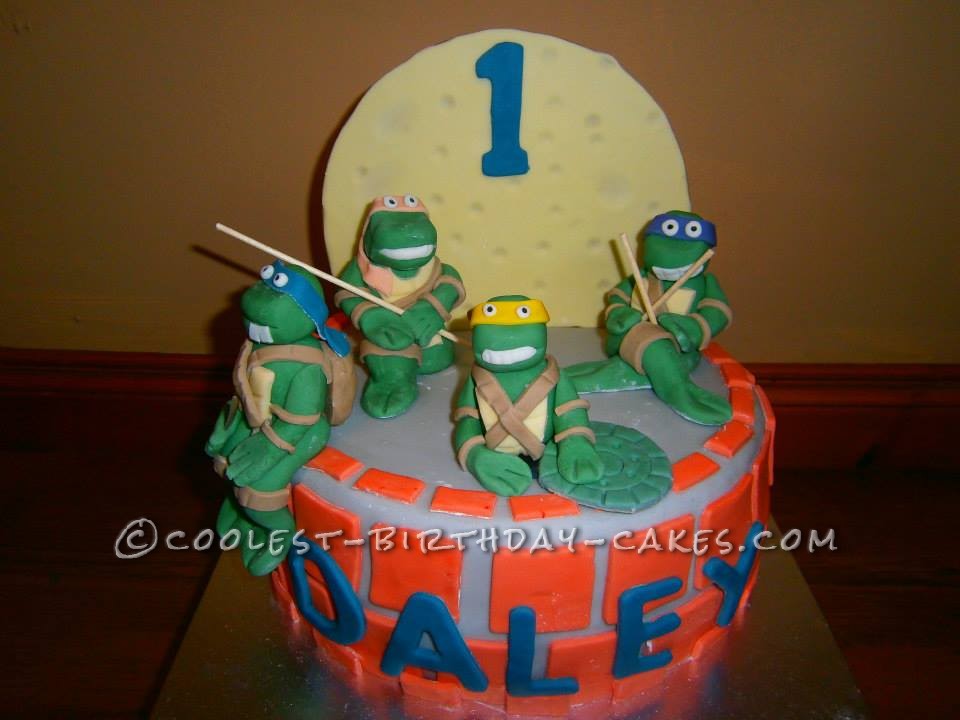 I was asked to create a Ninja Turtles birthday cake for a 1 year old boy. The characters are his favorite toys. As always, a little bit of head scratching took place whilst working on the idea of how to create the models. The base cake was a 10″ round chocolate sponge. I covered this with grey colored fondant and decorated it with brick-orange squares to represent a well in which the turtles live.

Each turtle was handmade using sugar paste strengthened with CMC powder and allowed to set for a few days. Each turtle was given individual colored bandanas, armor and weapons to suit the character. Each turtle was given a different pose. The model making was really enjoyable but did take a bit of time as each character, although similar, was different in pose and decoration. I used cocktail sticks as internal supports for some of the models to keep them in position and to lend strength. Edible glue was used to put them all together.

I used bamboo skewers for the longer weapons and a little bit of silver cake board for swords. I cut out a 6″ circle from a cake board to use as the support for the moon. This was covered in a pale yellow sugar paste and indented with a large ball tool to give a cratered effect (well, the turtles do prefer to work at night). This was then embedded into the cake and using a skewer as support (behind the moon and out of sight). Mum was totally delighted with her cake. She told me that she had tried a few other cake makers but they had turned down the chance to create this because it was too hard for them!

If you are not prepared to experiment, then how are you meant to progress in your skills? The cake was the centerpiece of the party and everyone expressed admiration for the decor and for the cake itself.