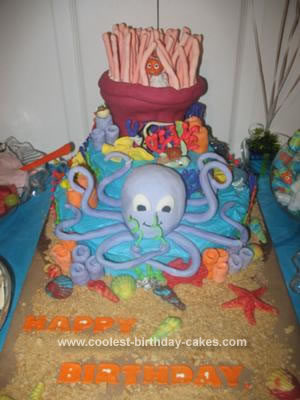 I really went all out for my son’s second birthday! He loved Nemo at the time, so I decided to do a coral reef scene. Everything on this Ocean Scene Birthday Cake is technically edible except or the Nemo figurines, which I purchased on eBay.

The main cake is two chocolate rounds stacked on top of one another and frosted with blue tinted buttercream. My son likes mint, so I flavored the buttercream used for filling with peppermint extract.

The anemone is three small rounds stacked inversely and covered in dark pink fondant. The fronds are made of gumpaste and are actually attached with royal icing to a round piece of gumpaste that I put on top of the stacked cakes.

The Octopus’ body is made of rice crispy treats molded into shape and covered in gumpaste. The legs are gumpaste and were molded specifically to hold the two birthday candles in front. The eyes are white fondant painted with food coloring.

The shells, fish (other than specific characters), and crabs were made from Wilton candy melts in sea themed chocolate molds.

Most of the corals are made of gumpaste. The branched corals are made from royal icing that I piped onto wax paper. Once it hardened I could peel it off and place it onto the cake.

The sand is graham cracker crumbs and the lettering was made by printing “Happy Birthday” in a Nemo font onto printer paper and then putting it under wax paper. This was a template for me to pipe royal icing onto (same procedure as the branched corals, except less free-form!).

The nice thing about this cake was that most of the decorations needed time to dry, so I could make them a little at a time in advance and store them until the night before the party. Then I could just assemble the cake.