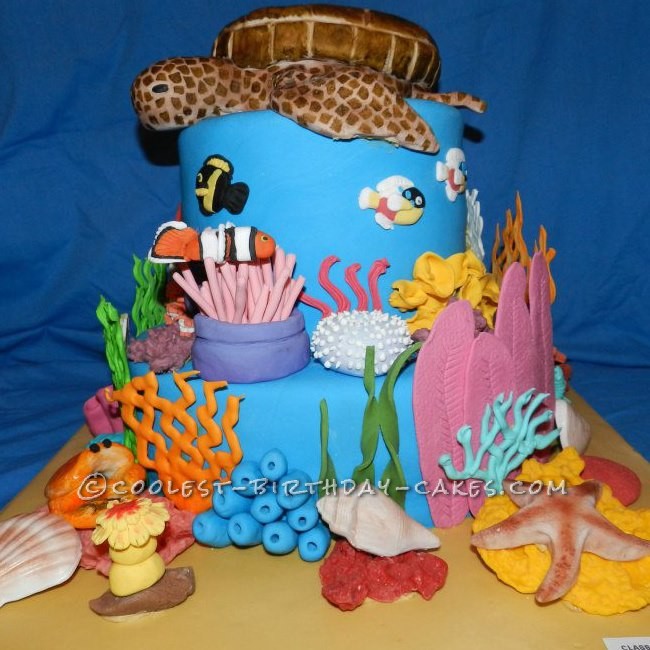 I decided to test my skills by entering a cake into our local show under the novice title. After thinking about it for a few days I decided I wanted to make my cake eye catching and bright, so I went with an underwater themed caked. Before even tackling the cake I knew I had to get a start on my decorations so they would have time to dry.

First was making my sea turtle. He was made from rice crispies shaped into the body and head. When that was dry I covered him in fondant and hand painted on the detail as I didn’t want him to be matte in color.

Next was my octopus! Now he was made purely out of fondant. I curled his legs around pencils and individually stuck on his little suckers, which took forever! I let him dry out then I painted him with watered down coloring gel. I used a sponge to give his skin texture, he looked great. But alas may my octopus RIP as he never made it to the cake. I didn’t make him early enough so when I pick him up to put him on the cake, plop, plop, plop, yes the sounds of his legs falling to the bench! I tried everything to get them to stick…but no…he was dead :(

Next I made up some royal icing and colored separate batches in bright oranges, pinks, yellows and greens. Using a piping bag and different nozzles I piped out coral shapes. They didn’t need to be perfect as I wanted it to look realistic. With odds of fondant I had lying around, I made blue worm tubes, and some other bizarre shaped corals. I made very realistic coral by melting white chocolate and pouring it into a bowl full of crushed ice!! It gives an excellent result instantly!

I made a little crab out of fondant and a few fish as well. The hardest part about the cake was that due to it going into the show, it was not allowed anything inedible  so I couldn’t use tooth picks to support anything. My sugar glue was going on thick and fast! I used shell and starfish chocolate molds to shape my fondant. I also made a Nemo fish, as every underwater cake needs a Nemo fish!

So I made a basic sponge for two tiers and covered it in deep blue icing. I made royal icing and colored it sand color and covered my cake board with it. Then it was decorating time! I just had fun with it as there was no right or wrong way. My heart stopped when I was putting my turtle on as his legs started to break…oh no you don’t! Sugar glue to the rescue! All in all I was making this cake for about three weeks. I did win my novice section which was very exciting as I didn’t think I would.