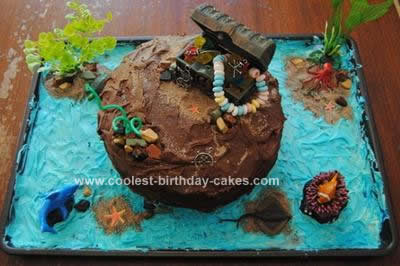 My mom and I made this Underwater Ocean Cake for my son’s 3rd birthday. Leading up to the birthday I was thinking we’d do an ocean theme this time round, as both kids have been fascinated with all things under the sea, Nemo etc. Growing up we all had our own special cake for our birthdays and I’ve been having my mom make a special one for each of my kids. Since my big kid shares my dad’s birthday and is his namesake, it’s only fitting that he have my dad’s cake.

However, it’s covered in chocolate icing, and my mom insisted that she would make the cake the way it’s meant to be, or not at all. The problem was figuring out how to turn a chocolate frosting covered cake into a blue ocean, an ocean scene on chocolate icing would be a pretty muddy ocean!

I started looking around on the internet for chocolate cakes decorated to look like oceans, and found a couple ideas to use. It looked like there was potential for blue sprinkles, especially the big ones, but I knew that would be a LOT of sprinkles. Then, I started to take note of the chocolate ship cakes set on top of blue oceans, and it got me thinking. I decided to put the round chocolate cake on a tray of blue icing. I didn’t want it to be an island though, just an undersea plateau. Since the plateau would also be underwater, it would need a starfish or shells, sand, and sea weed, and probably a sunken treasure chest.

Because of the treasure chest, the party ended up with a pirate theme. This actually worked out really well, because I made a pirate treasure hunt for the kids a few weeks back and my son loved it.

Once I had my idea I sketched out a design on paper. Then I knew what supplies I needed to find and roughly where everything would go. My mom made the cake, and then I decorated it. It’s a white cake with chocolate filling and frosting, set on a tray of blue icing.

I combined icing and blue food coloring in a bowl and mixed it. It looked like a pretty good blue, but I decided as I went along that it looked better when there was some white and blue swirls like swells etc, so I left it mostly unmixed in the bowl, and then spread it-which mixes it a little more.

Then I draped a candy necklace over the edge of the treasure chest and filled the rest of the chest with little gummies. They jumped out to me at bulk barn because they looked like they had light in them, they glowed like jewels so they were perfect. Then I washed the pirate charms (from the craft section at Walmart) and added the sword and the crossbones to the top.

To finish the undersea mountain (the top of the cake) I put in a sunken steering wheel, leaned a sunken anchor against the chest, put in some chocolate rocks and seaweed and sprinkled cinnamon sugar sand in patches.

Then it was time to decorate the rest of the sea. I set out the sea animals in their corners. The fish and the shark were from the pet store, and the other little sea animals were little plastic toys. DH’s sister got them from her teaching/toy store, but you could probably find something similar at a museum or even at a dollar store. Then I put in the seaweed, and stuck it down with some icing and rocks to keep it from falling over. I added a few little starfish (scrapbook stickers) a few more rock patches, and sprinkled some more cinnamon sugar sand.