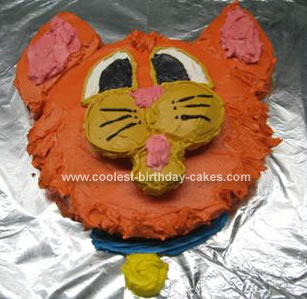 My 3 year old daughter loves the Disney movie that was recently re-released, Oliver & Company. For her birthday she asked for an Oliver Cat cake, the movie’s main character.

I baked 2 9″ round cakes and 3 cupcakes for the muzzle. One round cake is for the face of the cat. The other cake, I made two cuts for ears. For one of the cupcakes, I shaped it like an hour glass before baking, this will be used for the mouth.

I made butter cream frosting and then split it into the colors of white, orange, tan, black, blue pink and yellow.

I continued to decorate the cake with details. I finished up with swooping a knife on the edge of the cake to make it look like the cat’s fur and adding a band of blue for the cat’s collar.

Coolest Oliver in the Box Cake