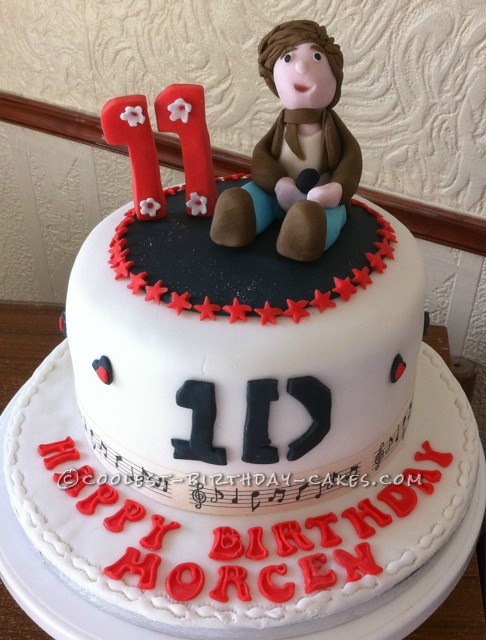 I was asked by a friend of a friend to make this One Direction cake for her daughter’s 11th birthday. She loves One direction.

First I had to make a model of Harry. I measured a piece of baking paper the same size as the cake tin and then worked out how big to make the model so that I would have enough room to attach the rest of the decorations later.

I first coloured the icing in the colours I would need. I then made the legs and attached a white torso for the t-shirt. With some brown icing I wrapped some around the t-shirt for the coat. Next, I made the arms in brown too for the sleeves of the coat and then a brown scarf to attach around his neck.

I made a ball of icing in a skin colour and attached this to the body using a cocktail stick to hold them together and using dark brown I rolled small pieces of icing into small sausage shapes and attached them to the head as hair until I had the desired look I needed.

I cut out some red stars and two number ones and the wording for the cake. Then, I made a template of the One Direction logo and cut it out of some black icing I had coloured earlier. I also cut out some black and red hearts for the side decorations of the cake and then set these all aside to dry.

I baked a 7″ round 3 layer vanilla sponge cake, filled it with jam, covered it with a thin layer of buttercream and placed in the freezer to chill. Meanwhile, I rolled out some white icing and when the cake was chilled I covered the cake and then the cake board in the same colour.

The young lady loved her cake and wouldn’t let anyone touch Harry Styles. I was over the moon with the end result. 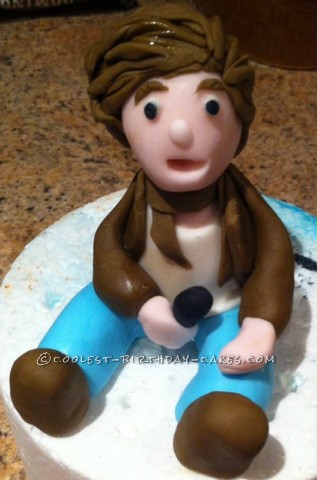