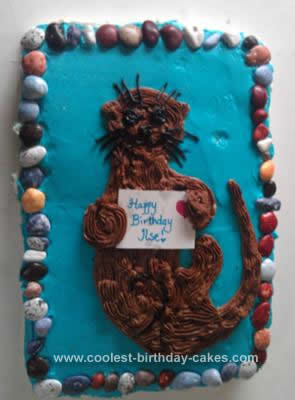 I have seen the beautiful 3-D otter cakes on the web, and I was daunted when my daughter wanted us to make an otter cake for her birthday. But I figured I probably could pull off a picture of an otter done in chocolate butter cream. It would be delicious, too!

So, we baked a chocolate cake, frosted it very smoothly in butter cream tinted the “right” shade of blue (according to my daughter), and used a star frosting tip to draw the otter in chocolate butter cream so that it looked “furry.” Details were added with a tube of Wilton’s black decorator icing and a writing tip.

We placed a card in its paws saying “Happy Birthday” and the final touch was decorating around the edge with chocolate rocks.