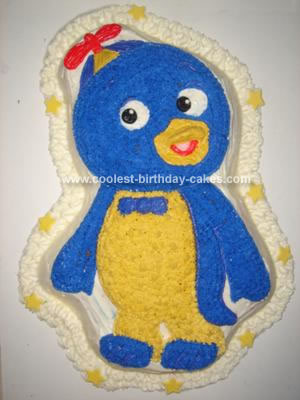 I decided to make a Pablo cake for my son’s 2nd birthday. I bought the cake pan from Michael’s and used buttercream icing made from scratch. I made one batch royal blue, the other a bright yellow another black, red, and then kept one white.

I applied white around the sides of the body then applied the blue and yellow on the body with a star tip. And then for the mouth used a regular tip and then smoothed it. For the eyes white then a black dot. And for the hat, red and blue and smoothed around the edges a star tip with white and I bought little candy stars and placed them around.

This was a lot of work but it was a hit.