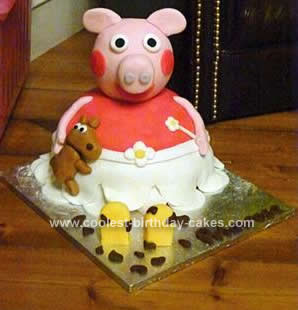 I am a novice – this Peppa Pig Birthday Cake is the first cake I have ever tried to make other than fairy cakes or sponge cakes (basic ones) but my daughter asked for one for her birthday and I thought I would give it a go after seeing a picture online.

I did have a trial run a month before her birthday just to see if I could do it – I am a control freak!

1. Firstly I tried making a pudding bowl cake but all of mine turned out really hard ( I think this is because I use an AGA!)

2. So instead I made three sponges – two large and one small for the body and layered them with jam and vanilla fondant before covering in regal icing.

3. The head I made a few weeks before I made the cakes and this is just a polystyrene ball from an eBay model shop (£3) covered in regal icing. The nose, teddy, ears were all held on by tooth picks and for the skirt I also used edible glue. I had never used regal icing before so there is probably a really simple way of getting things to stick, but as I mentioned I’d never even opened a pack of regal icing before.