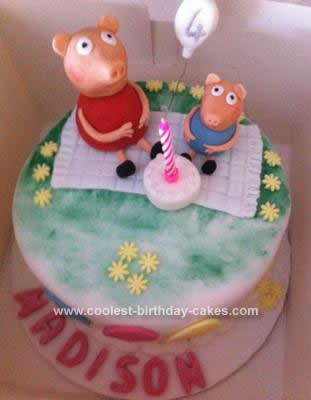 This Peppa Pig Cake was made for a friend of mine for her granddaughter, she loves Peppa Pig.

I stared by making Peppa and George pig. I colored some roll out icing in red for Peppa’s clothes and some blue for George’s clothes. I molded these into cone shapes, the red one slightly bigger. I then colored some roll out icing in flesh pink for the pig’s head and arms and legs. I started molding the pig’s heads making a snout and indented two holes with a modelling tool for the nostrils. I then attached a cocktail stick into the body and attached the head by wetting the icing slightly with a little water to stick it together (make sure the sticks not too long else it will poke through the head).

I rolled out a small amount of pink icing into a sausage shape thin enough to make arms and legs. I then colored some icing in black for the shoes and attached these to the legs. I the made a curly tail and attached this to the body. I then made the shape of a balloon and attached a wire to it and it was left to harden before decorating.

I started by baking 3 x 8inch sandwich cakes. I filled one half with jam and the other with butter cream and sandwiched them together. I then covered the whole cake with butter cream and chilled in the fridge for about 30mins. The cake was the covered in white roll out icing and left overnight to harden slightly before decorating.

Now it was ready to decorate. Using a sponge I colored the top of the cake green in patches to resemble the grass, and then rolled out some white icing and cut out the blanket. I then attached the pigs using a little royal icing. I made the shape of a small cake to place by the pigs so later I could attach a candle. I then colored some roll out icing in yellow and made some small flowers. I attached these to the cake.

With the left over red icing I cut out the name and stuck this around the cake board and finally I colored a number 4 onto the balloon on the wire in glitter. The little girl loved this Peppa Pig Cake. 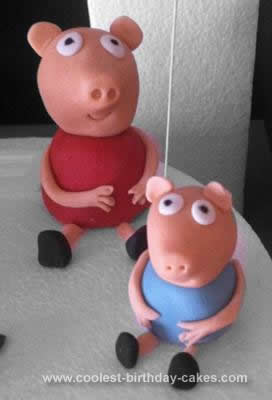