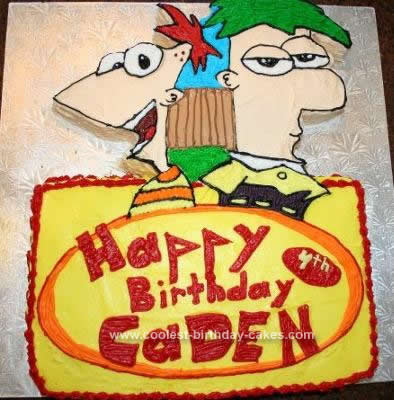 The base frosting was a buttercream and it was somewhat difficult to frost in between their hair. I recommend a small pallet knife or something like that to get into those small places. Then I cut out the sections of the paper pictures that I needed to trace, such as the eyes, Ferb’s shirt and pants, the hair, Phineas’ mouth, etc. I then laid the pieces that I had cut out of the paper pictures in the appropriate places on the cake and traced them with a toothpick in the icing. I used a #2 tip and piped the outline in black.

The rest was pretty much a fill in of the colors. In between Phineas and Ferb, I wanted something that would distinguish them from the base frosting (the base frosting is the skin color). So I prayed about it and got the idea to do their backyard fence, some grass, and sky. The bottom cake oval of the logo was traced by a cut out of the actual logo. Then I eyeballed the words and obviously changed them to say happy birthday to my nephew. I piped a #14 shell as the top border and a #16 on the bottom.

You probably already know this, but just in case you don’t, Americolors and Wilton colors will darken over time. So be sure that you actually make your colors a little lighter than you want them. Ferb’s pants were a great purple color and they darkened in the two hours it sat before the party. I have to say, I think this is my favorite cake that I’ve done so far!