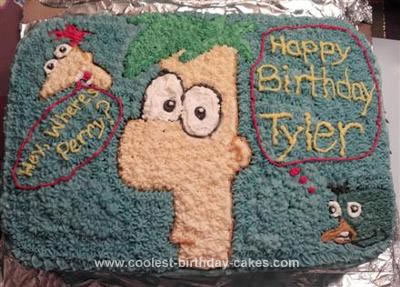 I made this Ferb cake for my son’s 8th birthday. He loves Phineas and Ferb, but mostly Ferb! I tried to convince him to let me cut out Ferb and only do him, but he wouldn’t have it.

Phineas was probably the hardest because he was so tiny. I bought flesh coloring to make it easier on myself. After Perry was finished I piped blue all around to fill in the cake (my son wanted it blue). By this time the icing had to be put into the freezer a bit because it was getting extremely warm from handling.

I made a homemade butter cream icing for it that my family loves. The cake was placed in the refrigerator over night and it was perfect the next evening. I was quite attached to this one. Cutting it was the worst part for me! I have even had a few requests to make a Ferb cake for my friends kids!