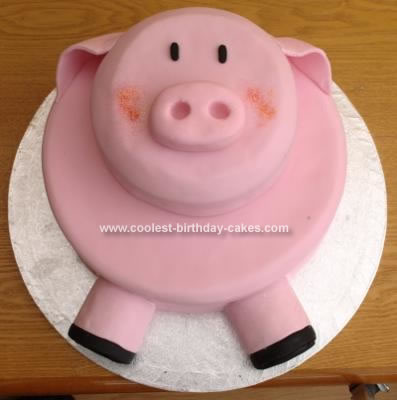 I made this pig cake for a pig-mad friend’s 40th birthday and it got lots of positive comments.

It is based on an idea found on this web site so in return here is a picture of my attempt along with a write up of how I did it.

Legs are made from a chocolate Swiss roll about 5in long by 2 1/2in in diameter and cut in half. (I cheated and bought the Swiss roll from a well known national supermarket chain).

I covered the body on top and the sides using one piece of pink sugarpaste icing, ‘sticking’ it down using a solution of apricot decorating glaze applied with a pastry brush. The head was covered as above and stuck onto the body with buttericing.

The legs were covered in pink sugarpaste except for the trotters. These were formed using a small strip of black sugarpaste around the bottom of the leg and finished with a circle on the end which I cut using an appropriate size pastry cutter.

To complete the cake, I ‘glued’ on the following items using a weak icing sugar solution. Ears, shaped from a square of rolled sugarpaste approx 4in across, cut diagonally into two triangles.

Although I was expecting to use something like gum tragacanth to stiffen the ears, I didn’t need to as they had adequate support from the head and body.

Nose made by shaping leftover pink sugarpaste and pushing in a wooden spoon handle to make nostrils.

Eyes made using black sugar paste cut using the letter O cutter from a set of alphabet cutters we have (I used the center part of the O which is usually discarded.)

The rosy cheeks are edible glitter.