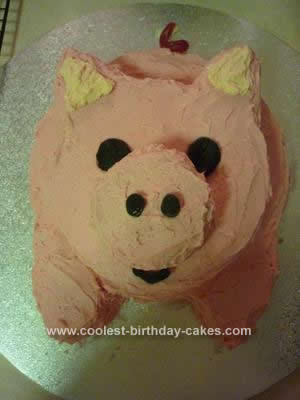 It was coming up to my daughter’s third birthday and I was excited. It was the first year she was starting to really get excited about her upcoming party. I wasn’t really sure what (if any) theme we would have, so I asked her what sort of cake she would like and quick as a flash she replied “Pig cake!” so our farmyard themed party was born.

I had a flick through photos on here for inspiration and then I found a pattern for one in “The Australian Womans Weekly Childrens Birthday Cake Book” as well. The decorations on that one were a bit out there for me, so I toned them down a little, but the shapes they suggested worked really well. Basically you cook two identical round cakes, one becomes the body and then you cut out the other bits from the second cake. I have included a photo of them cut out (the circle for the snout comes from between the pig’s ears).

It was a great success, my daughter and the other kids loved it. As there was quite a lot of cake, I ended up sliding the head off after the candles were blown out and saving it for family celebrations the next day and just cut up the body for eating. It still looked cute without the body, so you could always just do the head if you wanted! 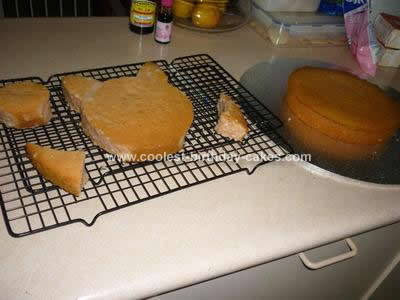