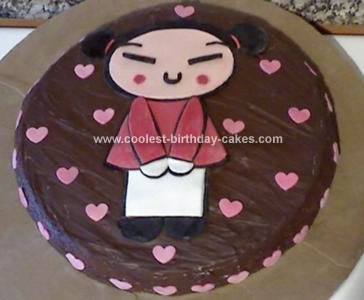 Funnily enough when I was asked to do a cake of Pucca I had never seen this character before and so I was afraid that it was something difficult to do but as soon as I downloaded a picture of her from the internet I was releaved because it is extremely simple.

First of all I took a sheet of carton, a pencil a ruler and scissors in order to draw and cut Pucca’s body parts. A big oval for her head, a rectangle for her upper body part, a square for her skirt and 2 long rectangles for her arms.

For the her feet, hair and hands I cut circles of sugarpaste and cut them again in halves. Two tiny flattened sausages of black sugarpaste for her eyes and mouth and some red edible powder for her rosy cheeks.

Now all I had to do was baking a round cake, coat it with milk chocolate and assemble the Pucca pieces on it. Some small pink sugarpaste hearts gave the cake a romantic touch!.