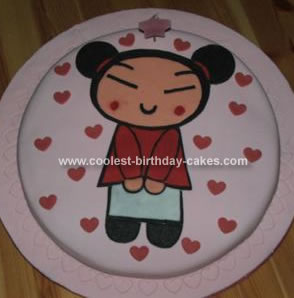 I wanted to do a Pucca Birthday Cake which would look great but at the same time I didn’t have a lot of time to spare. Therefore I thought of just doing a normal cake and just place a stenciled Pucca on it.

I baked a round chocolate cake and covered it in pink sugarpaste. I did the Pucca stencil two days before so that the sugarpaste would be hard enough to be handled easily. I had a picture of Pucca which I have studied very well and then I cut all the parts out from a sheet of wax paper.

I rolled out some pieces of red, white and black sugarpaste and cut around the wax paper pieces which I had prepared in order to form the head and body of Pucca. I assembled the Pucca pieces on top of the cake and stuck them together with some sugar glue.

As a final romantic touch, I cut out some pink heart shaped pieces of sugarpaste and scattered them all around my Pucca.

Very simple but cute isn’t it?

Coolest Pictures of a Spiderman Cake