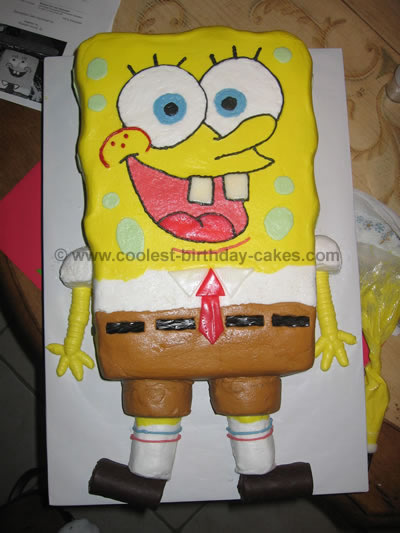 My niece was having a Sponge Bob party for her 3rd birthday, so my sister and I had to come up with the perfect cake. I checked out the internet and from the ideas on this web-site came up with this Sponge Bob cake. It was a big hit!

I printed out the picture of Spongebob that I wanted to use for the face, blew it up to the size needed, then printed it out on a clear overhead sheet. I traced the face on the overhead with clear gel then pressed it on the iced cake to provide an outline to work with (gel transfer).

I used Twinkie ends for shoulders, piped the arms and hands. I used Ding Dongs for pants legs, Swiss Rolls for legs and shoes. I used black licorice for the belt and cut out the tongue, shirt collar, tie and teeth from Air Head candies of the appropriate colors.

My kids love Sponge Bob. So for my daughters 6th birthday, I decided to make her a Sponge Bob cake. I used 2 boxes of cake mix, baked on sheet cake pans. I used one full sheet cake for his head and body and then cut up the second one to use the other parts, such as long thin lines for his legs and arms. I used a long thin layer for his nose and oval shapes for his shoes. I used the frosting as glue to hold all the pieces together. I then took whipped vanilla icing and placed it in several different bowls and used food coloring to make the different colors. Then I took a picture of Sponge Bob and went to work decorating. I added jellyfish on the sides for an extra touch.

I made this cake for my nephew’s 7th birthday. He had been to other parties that had Sponge Bob cakes, but he wanted one that was actually in the shape of Spongebob rather than having a design on top of the cake. It looks a little intimidating at first, but was really easy once you get all the “pieces” prepared for assembly.

This Spongebob cake took several different items to complete: One sheet cake, some large pretzel or breadsticks, Ho-Ho-s, and King-Dongs.

I baked the sheet cake, and after it cooled cut the top and bottom corners off one end. The corners are later used as Spongebob’s hands. Ice the cake and decorate it to resemble Spongebob. I used canned chocolate and vanilla icings, and bought tubes of icing with the plastic tips to fill in the face, shirt, tie, etc.

For arms and legs: Take two Ho-Ho cakes and cut each in half; ice them with the vanilla icing to make Sponge Bob’s sleeves. Ice the other two pieces with the same chocolate icing used to ice sheet cake. Also, ice the two corner pieces cut from the sheet cake with the chocolate icing. Purchase yellow and white candy melts. Melt the yellow candy in a large microwaveable bowl and dip the pretzel sticks to completely coat them. Allow them to dry, and if necessary, re-heat the candy melts and dip pretzel sticks again. Take two of the pretzel sticks and dip ½ way up into the white candy melt to make “socks”. Repeat the white melt after the first layer has had time to cool and set up.

This Spongebob cake takes up a lot of space, but my nephew and his friends LOVED it! The adults enjoyed snacking on the chocolate-covered pretzels as a change of pace from being served birthday cake.

My daughter really loves Sponge Bob, and she wanted a Sponge Bob cake for her birthday!

The frosting I used was food coloring to get the yellow for his body and brown for his pants…We had a Great time and Katherine was so happy with her Spongebob birthday cake! Sponge Bob was a Hit at the Party!

I used two cake mixes, 4 tubes of icing and marshmallows. I used a star tip to decorate the cake. For Sponge Bob’s legs I iced 4 marshmallows yellow and 2 black for his shoes. For his arms I used 4 marshmallows and cut 2 up to make his fingers. I used Wilton ‘s Sponge Bob color set to tint the icing.

My grandson wanted a Sponge Bob Cake so I got a colored template online from one of the kid parties sites, printed it, cut it apart then used it to draw the body on the cake. Since it was too big to get the legs and arms on the cake, I cut out the arms and legs on the template and put them on stiff paper with extensions to stick into the side of the cake. It really worked out well and he loved his Spongebob cake. 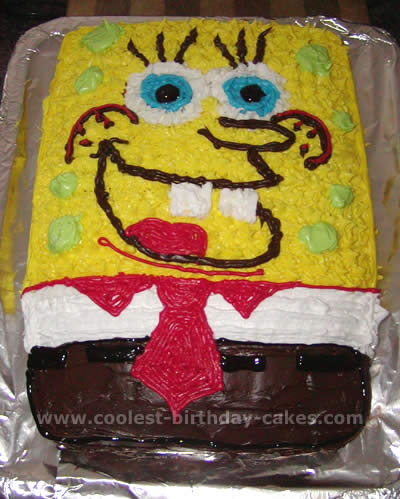 , I made this cake for my twins on their 2nd birthday. I couldn’t find a cake pan or the decorations to make one with so I thought I’d do it myself. First I used yellow food dye to make his body the correct color. I used white icing for his shirt, and chocolate for his pants.

I looked at a Sponge Bob while drawing the face and eyes. I used the star tip on the whole entire body and just spread the rest of the frosting. There really is no proper way of following my directions, just use your imagination and go for it.

First, I started by baking a 13×9″ cake. Then, I duct-taped two 13×19″ cake-boards together and put one across the middle of the back for support and covered it with foil. I placed the cooled cake, topside up, onto the foil.

Then, I made homemade butter cream icing and separated the icing into 7 bowls to make: yellow, pink, red, blue, green, black and brown-colored icing with food coloring to match Sponge Bob’s colors for all of them except the brown, which was chocolate icing. I also set aside some of the icing without food coloring for the white part of the cake. I just estimated on the amounts of icing to set aside depending on how much of the particular color I would need to use.

By looking at the party plate, I drew out Sponge Bob with pencil on a 13×9″ piece of cardboard for a guide to look at. Then, I iced the yellow, white and brown on the cake. Next, as I looked at the SpongeBob picture I drew, I started drawing Sponge Bob’s features with a toothpick on the icing, so if I made a mistake I could just smooth out the icing and redraw it just how I wanted it without messing up the icing!

Next, I added the icing to decorating icing bags and used a round tip #4 to outline and fill in the features on the cake that I had drawn with a toothpick.

Lastly, I drew Sponge Bob’s arms, hands, pant legs, legs and shoes onto the foil with a black marker and filled it in with icing using round tip #12 for everything except for the lines on his socks and his shoes— I used round tip #4 for that. Then, I put a little dab of white icing on each of his shoes and that was it!

It was time consuming, but very worth it for my little two-year-old daughter, who absolutely loved it! Everyone at the party asked where I got the cake and I proudly told them I made it!

The blue eyes are made of blue bubble gums. The inside of the mouth is chocolate frosting mixed with white frosting to make it clearer. The three red dots on both sides of the mouth are 3 cranberries from a pot of cranberry preserve we had in the fridge! ;)

The tie is made of cherry fruit by the foot that was precisely shaped with little scissors by Aurelien’s aunt who helped me make the cake. But then I had to find out how to make the big green dots all over Spongebob’s face and I had this idea: I cut round shapes of different diameters in a green apple peel!

The kids as well as their parents were just amazed that I made it myself! It looked really great and everyone loved it!

I made this Sponge Bob cake for my son’s third birthday. I completed it in the following steps using a rainbow bit cake mix:

For this Spong Bob cake, I used 2 square cake pans. One was for the main body and the other I made hands feet and shorts from. I used 2 Betty Crocker Cake mixes (with pudding in the mix type)- then I made a butter cream icing: This is 4 cups icing sugar- 1/4 cup Crisco, 1/4 cup butter- 3tbsp of cream or milk. You can add extra butter if you want it creamier.

Cream the butter first and then add the icing sugar. Mix using regular electric mixer. Decorate with the colors you choose- I skipped the red tie, as even when using the no taste it still tastes yucky. I made pink in the mouth using cherry juice instead of food coloring.

Well I’m back,thanks to this great web site, COOLEST BIRTHDAY CAKES, I found Spongebob Squarepants ideas here so I thought I’d have a go myself!

I made a rectangle chocolate sponge cake and iced it with butter cream icing (buttermilk icing). I drew a picture of Sponge Bob Squarepants on a piece of paper using it as a guideline to place on top of the cake. I then got a sharp knife and cut/traced the lines so that I would know where to place the different colour icings.

I made 1 big bowl of icing and then divided it into 5 different bowls to mix different colours. It was difficult to mix food colouring to make brown. I ended up melting chocolate and using that instead. The black icing for the piping was made a thicker consistency (I didn’t want it to run).

I was trying to go with a Sponge Bob theme so I also made a replica piñata. I made it out of a large rectangle cereal box. I wrapped it in 3 layers of newspaper; tissue paper and I drew a face. I attached a thin rope to the top and reinforced it with tape. Remember always use covered/wrapped lollies, as they do fall on the ground.

My son and all the other children loved it both the piñata and the cake; I just got upset it had to be eaten (it looked so good).