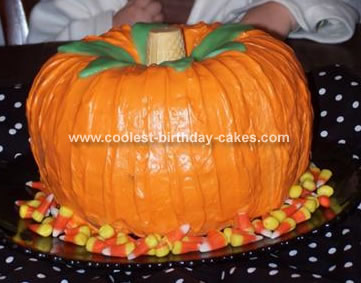 Since my son’s birthday falls two days after Halloween we decided to combine his 2nd birthday party with our plans to have friends over to go trick or treating together. I decided a pumpkin cake would be a fun idea.

I made two pound cakes in a bundt pan. Since I only have one bundt pan I had to do these one at a time. Once they were both done and cool, I cut about a half an inch off the bottom of each of them to make them nice and even. I then turned one pound cake upside down and covered the top with icing. Then I placed the other pound cake on top. I wrapped the whole thing up and stuck it in the freezer for a while to make it easier to ice.

After it was frozen I iced the cakes with store bought cream cheese flavored icing that I tinted orange with food coloring. I used a knife to run up and down the sides lightly to try to give the ribbed appearance of a real pumpkin. I stuck an ice cream cone in the center hole for the stem.

I decided it needed some leaves so I raided our stash of Halloween candy and grabbed all the apple flavored airheads. I microwaved each of them for 10 seconds so they would be pliable. Then I just molded them into leave shapes and placed them on the cake.

I was so pleased with how the whole thing turned out and with how easy it was to do. My two year old loved it!