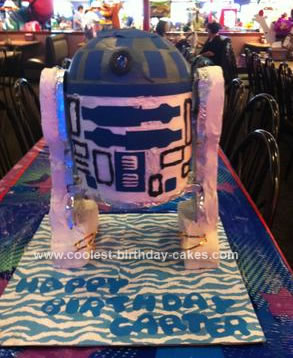 I made this R2D2 Star Wars birthday cake for the 7th birthday party of a close family friend. I searched the web and modified all that I found to create this cake.

The legs and base are made out of MDF board and Styrofoam. I didn’t feel that rice krispy treats would hold the cake.

I cut out the legs and covered in Styrofoam to stand up. I also covered the inside of the legs with aluminum foil and added a small circle that makes it appear to be attached to the body. I used the foil to avoid having to ice the insides of the legs – this allowed me more freedom when connecting the base/cake to the legs.

The outside of the legs were frosted with butter cream icing and then smoothed using the Viva paper towel method. I cut out arm inserts from blue sugar-sheets (purchased at Michael’s and Hobby Lobby). The base had inserts cut out to connect to the legs.

The body and head of R2D2 is entirely cake, icing and sugar-sheets (exception of the glass eye).

I allowed the icing to firm up by placing in the refrigerator; I then drew the design on the cake and piped in black icing. I also used the blue sugar sheets to create the major designs on the head and body based on images I found on the web – I improvised based on what I thought would fit and on what I could easily cut out. Using a small glass piece I created the “eye” of R2D2 by placing it into black icing. Finally, using golden tie wraps, I created the wires at the feet.

You could use the star tip and create the blue designs, but I went with what I consider the easier way and used the sugar-sheet. Fondant would also work instead of sugar-sheets. I also looked for black licorice rope to do the black piping designs, but was unable to locate any.

If I was to do this cake again, I think I would make a black Styrofoam base for the body rather than having the legs and base to create the suspension of the body. This would make it a more stable cake and it would be easier to transport and to set up at location.

I placed this on a 16×16 cake board that I covered with scrapbook paper and cut out the words “Happy Birthday Carter”. If I had been thinking, I would have written “May The Force Be With You”.