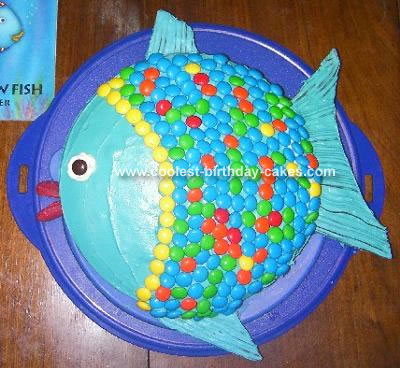 I got the idea off of the internet after combining 2-3 other ideas and using the fish in the book Rainbow Fish for my color concept.

The rainbow fish cake is 2 9 in rounds. I colored cream cheese icing to make it Rainbow Fish colored. The lips are lollipops, the fins are a 1 lb bar of choc covered in icing and held up by skewers in the cake. (I think the 1 lb was too heavy but the proportions were right). I spent an hour just separating the M&M’s so that I could custom mix the colors for the scales. One 24 oz bag has just over enough blue for the scales.

I used a hot knife and a warmed up(warmed up in the hot kitchen just by laying around) bar of choc the stuff I trimmed off of the ends of the bar became the top and bottom fins. And the cut on the side became bribes to my 3 yr old to let me finish in peace.

I found icing the fins after they were on the cake easier than before putting them on. I used a fork to make the lines on the fins.

I also found putting the candies up on top of each other (slightly) gave it more of a 3D effect rather than a lot of gaping holes for where the circles didn’t come together.