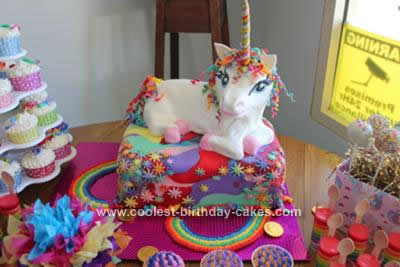 My girl request a 5th birthday with everything unicorn and rainbow… so off to Google, pinterest and all about to find some inspiration to make a Homemade Rainbow Unicorn Cake. The final product was a blend of about 5 or so different cakes I’d seen photo’s of with touches of my own desire.

The base slab cake that the unicorn sits on is made up of a seven layered rainbow cake. I made the rainbow, tie die fondant by making up 2 long skinny sausages of fondant in each color and then randomly twisting two colors together and then twisting all the twists into a big thick rope. I then spiraled them into a snail like shape and then rolled it out thereby creating the lovely multicolored effect. Keep rolling to a minimum as you don’t want to end up with a mucky khaki blob of fondant.

The horn was made using a white and rainbow colored fondant sausages twisted and tapered to a horn shape around a wooden skewer and sprinkled with edible gold glitter with the very tip dipped in glitter for a solid sparkle tip. The rainbow fondant curlicues were made by rolling multiple color strips of the fondant side by side very thin and slicing strips to curl around a chopstick, sliding them off and setting them aside to harden ahead of time.

The unicorn is made using the Wilton Little Lamb Cake pan. I trimmed off the ears and shaped the head a little whilst also molding legs and the nose using a biscuit cake pop mix. The nose was molded around a small toothpick to make attaching easier. The whole unicorn shape was then crumb coated and butter creamed. White fondant covered the unicorn – this was a little trick to try to not have too many seams or joins. I used two pieces and had the seam/join below the chin and behind the head where the mane covered most of the join. Pink fondant over the unicorns hooves and the eyes and lashes were cut from colored fondant and then attached with fondant glue. Small piped butter cream attached the tail and mane curls. Horn attached with the skewer, it was wrapped around and ears from fondant were attached into indents with a little glue.

The cake was a huge hit with the children and adults alike and I was very happy with the results. It might look tricky or daunting to take on but seriously if you don’t try you’ll never know… you just might surprise yourself! 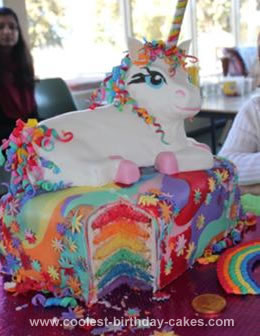 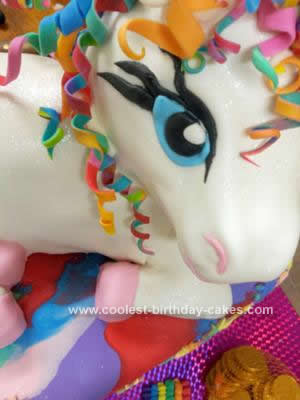