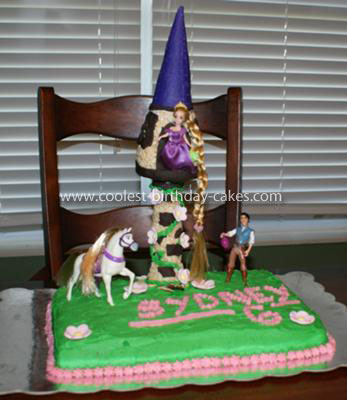 I made this Rapunzel Tangled Birthday Cake for my daughter’s 6th birthday. Her request was for a “Tangled” cake, so I searched this site for ideas (as I have done in the past). This is what I came up with after using a variety of suggestions and ideas submitted by others.

I started with the tower. I used a plastic dowel rod (Wilton) that I purchased at Michael’s to provide stability. I constructed the platform that she is standing on by cutting a hole in the center of the lid to a pickle jar and inserting it into the dowel rod so the top of the lid faced downward. I made a batch of rice crispie treats and them used them to form the tower around the rod and to construct the house on top of the pickle jar. I left a little of the rod exposed at the bottom to stick into the cake later.

I purchased a multi-pack of fondant icing with the colors purple, orange, yellow, and pink. I rolled out some of the purple and formed it around a regular sugar cone to create the cone on top. I then used a toothpick to create a “brick” effect on the cone. I took some of the orange and kneaded in some blue food coloring to make brown fondant, rolled it out, and cut it into strips to cover the edge of the jar and to create windows on the house. I also used some to create bricks on the bottom of the tower.

I baked the cake in a 9 x 13 pan and removed the pan by turning it upside down on top of a cakeboard. I iced the cake with green buttercream icing and then piped some of the same icing on the tower to create the vines. I stuck the tower into the cake and used some small short-bread cookies at the base to provide a little more support. I trimmed the edge with pink buttercream icing and used this to decorate the top and to secure the pink icing flowers (Wilton – purchased at Wal-mart) to the tower.

All of the figurines were a gift to the birthday girl, also purchased at Wal-mart. I did have to secure Rapunzel to the tower by tying dental floss around her and the cone. I really thought this was going to be difficult, but it was not at all. I have only made 4 other “custom” cakes, and this was really pretty simple.

Thanks to everyone else for ideas!