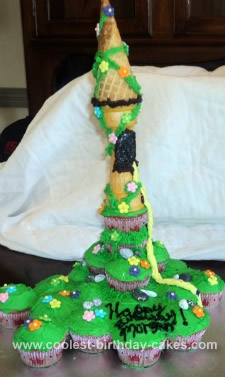 I used A confetti cake from a box mix. Baked them by instructions. Once they where cooled, I placed 11 cupcakes for the base of the cupcake tower. Frost the base cupcakes by first coating the center of each cupcake and then spreading the frosting across the gaps.

Place three cupcakes on top of the cupcake base and frost as well. Stack up two more, frosting each one. Next take two shish kabob skewers and stab one down an ice cream cone so it sticks straight up brushing the edge of the narrow end of the ice cream cone. Take a second ice cream cone and stab it’s base with the skewer until the two cones touch at there bases. Use the second skewer to secure the opposite side of the cones. You’ll have what looks like two long toothpicks sticking out of the end of the open part of an ice cream cone.

Take the last cupcake and turn it upside down and place it on the dull end of the skewers. This will be where the tower roof will sit. You can either use a waffle ice cream cone, or create your own cone out of cute paper. To keep your frosting on the tower you’ll need to touch the frosting tip to the tower and squeeze the frosting firmly and directly on to the ice cream cones.

Use one hand to support the tower while you squeeze the frosting around the cupcake tower. For Rapunzel’s edible hair I used fondant. Separate it into three sections and roll them out into thin strands for Rapunzel’s hair. Braid carefully and set aside until you’re ready to attach it to the tower. With black frosting and a star frosting tip, frost around the top of the tower where Rapunzel’s hair comes out to make it look like a window.

I used fondant for window then printed a picture of Rapunzel cut it out and placed her in. Hope you have fun and enjoy making a Homemade Rapunzel Tower Cake. 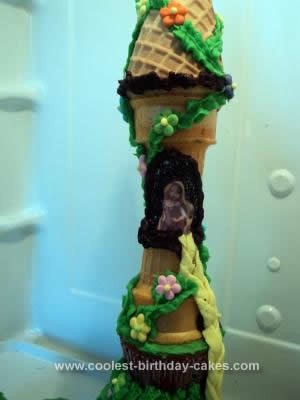 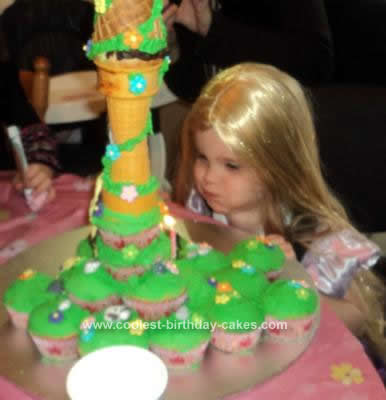