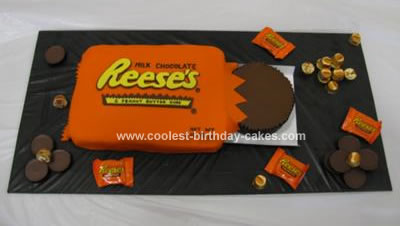 I made this Reese’s Peanut Butter Cup Cake for my dad who LOVES Reese’s peanut butter cups.

First, I baked a regular 9×13″ cake and another round 6″ cake. I frosted both of them and set them aside. Using different colored fondant, I next rolled out some orange (the color of the Reese’s package) and the logo.

For the logo, I had to first print one from the computer and then I laid it down on top of the yellow fondant I had rolled out. I cut through it so that it looked as close as possible to perfect. After I did this, I laid the yellow Reese’s logo on top of brown fondant and cut around it, making it look just like on the package.

I was able to lift the whole thing and lay it on top of the orange fondant covered cake. Then, I cut the logo underneath the Reese’s logo out of the brown fondant and laid a smaller yellow version of the same thing on top of that.

I used food writers to write the words “milk chocolate” and “2 peanut butter cups on top of and underneath the logos.

I then covered the small 6” cake (the PB cup) with brown and black fondant to make it look like a PB cup. I made a “tray” out of white poster board (the only non-edible part), PB cups are always on a tray inside of the package.

Finally, I made it look like it was coming out of the package, like the package had been ripped.