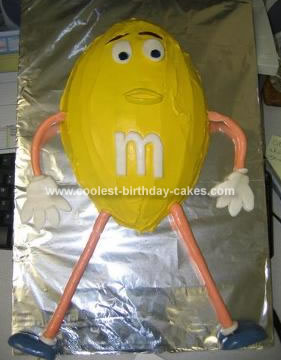 This was my first attempt at making something other than the standard two layer, eight inch round cake for a birthday cake. I made this Peanut M&M Birthday Cake for one of the vice president’s of the company I used worked for. He kept a jar of peanut M&Ms on his desk, so I decided to make him one for his birthday.

Ahead of time I made the arms, legs, hands, and feet, as well and the M, eyes and lips out of ready made fondant. I tinted some of the fondant peach for the arms and legs. I used blue for the shoes, and yellow for the mouth. I rolled out plain white and free cut the hands out of that. I also cut out two rounds for his eyes and the signature M for the belly.

I prepared a box of Red Velvet Cake Mix as directed and baked the cake in a Wilton Football cake pan. I tinted cream cheese icing with yellow icing gel and iced the cake.

After placing the body on a cake board covered in foil, I put the final pieces together and placed them on the board.

I was very excited at how it turned out – being my first attempt at something like this.