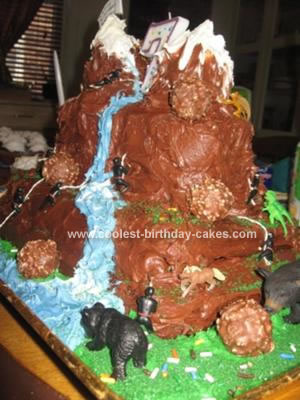 This Rock Climbing Cake was my very first attempt at sculpting a cake. No previous experience with creative cake making or decorating classes.

For my son’s seventh birthday we were taking him to a local rock climbing gym in Baltimore. So, I had a last minute idea that came to me in a dream. The night before I dreamed of my wedding cake. My cake had a novel idea of placing rings embedded in the cake with a ribbon attached. The idea was that the brides maid who pulled out the gold ring as opposed to the silver ring would be the next to be married (this activity replaced the garter belt toss). Anyhow, so I awoke with my master plan.

I would build a mountain cake with climbers (attached with a prize)! It turned out to be a real fun project for my son and I.

So, as I said it was a last minute idea, the cake was made with all the baking pans and cake mixes I could muster up at home. I let them cool while my son and I headed to the toy stores early the day of the party after the cakes were baked. At the store we found miniature animals, men, candy and our imagination took us away!!

When the cakes were cool a few hours later I laid the longest cake at the bottom and started to build up. Between each cake layer I placed a toy wrapped in tin foil, attached by cooking string to the Ninja Climbers (couldn’t find actually climbing people and these were the closest what we looking for). I set each layer with frosting to cement the layers.

For the tops of the mountain I used cup cakes and a Toblerone candy for the tip. Once the shape was established I iced the cake with chocolate frosting. The mountain river was also made of white icing colored with blue food coloring. Hint: you have to move quickly because the icing dries quickly.

After the mountain was sculpted we placed all the toys and candy we bought and placed them all over the cake. The ninja climbers were going up the mountain challenged by Roche candy boulders, man eating dinosaurs, flying monkeys and black bears. There was also a crystal rock candy treasure, a dinosaur fossil against the mountain side, wild horses, and even a river shark!

However you make or decorate this cake, it is a forgiving design and mistakes can easily be remedied.

The most important thing about this cake was that my son had so much fun helping plan and decorate his birthday cake. He was so proud of himself! And in the end his friends thought it was the coolest cake, EVER…they loved their parachuting people prize! 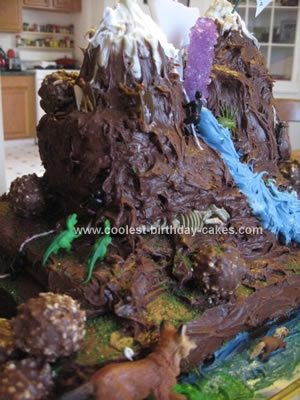 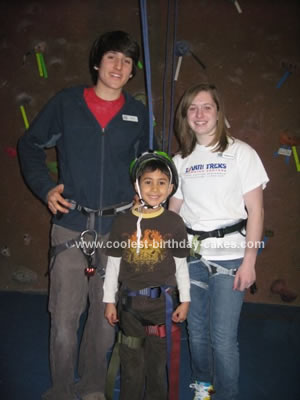