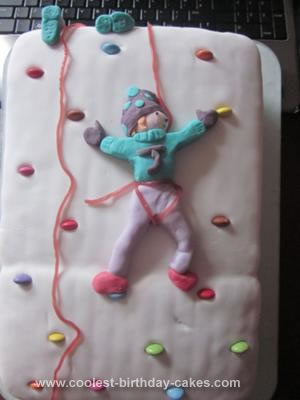 I got the idea for this Quickest Climbing Wall Cake from another cake on the website – MANY THANKS! to Anna D, York UK. Needed to make something fairly quickly for grandson’s 13th birthday, my daughter’s oven broke!

I made a large base, using 3 8″x8″ sponges, cut one in two to make a 12″x8″ two layers. Filled layer with apricot glaze and vanilla buttercream. Only second time used fondant icing (bought). After re-rolling a couple of times, managed to get size right and covered cake.

Added a couple of boots going over the ‘top’ which went down well, as something always happens where Jake’s involved. Really pleased with this one, and thanks again for the original idea! 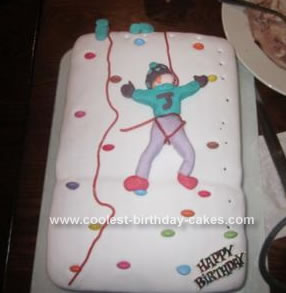