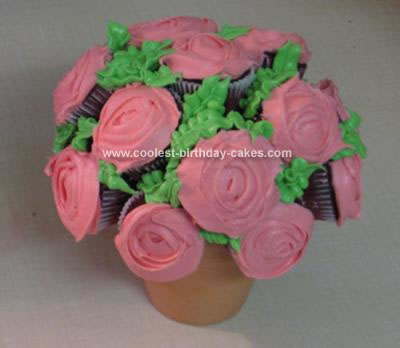 To make this rose bouquet cake I used a small, unused, terracotta plant pot that I picked up at Wal-Mart, a green Styrofoam ball that I picked up at a dollar store, some tooth picks and some mini cupcakes. This looks a lot harder than it really is. This was the first time I had ever tried making a cupcake bouquet and it was a lot of fun.

I used a red velvet cake mix, but you could use any flavor you want, and used white chocolate, almond icing to decorate the flowers. I’m lazy so I usually use store bought icing. I think it was Duncan Hines, Creamy Home- Style, White Chocolate Almond. It is by far the best tasting store bought icing! $1.50 at Wal-Mart! You can’t go wrong with that price.

The amount of cupcakes you will need depends on the size of your plant pot. You could also use larger cupcakes but since it was my first time making a bouquet I wanted to start off small. I baked my cupcakes, let them cool for about 10 minutes, popped them out of the pan and let them cool completely on a wire wrack.

Once cooled I started making my bouquet. I took my plant pot, stuck the foam ball inside of it and made sure it was in there securely. I then started attaching my cupcakes to the foam using tooth picks. I used one took pick for each cupcake, but if you were going to use larger cupcakes I would suggest using 2 tooth picks for each cupcake. I found it was easiest to figure out where I wanted to put the cupcake, make the hole in the foam with my tooth pick, take the tooth pick out of the foam, stick it into the cupcake and then attach it to the foam.

It sounds like a lot more work but if you just ram the cupcake onto the foam the tooth pick will shoot right out of the top of the cupcake ( I made that mistake myself). Once I attached all of my cupcakes I started to ice them. I tinted my icing with a little bit of Wilton no taste red icing color gel to make the pink roses and tinted a bit of icing with Wilton leaf green icing colors gel to make the leaves.

You can make any type of flower design that you want, I think sunflowers or daisies would be really cute. I had never made roses before so I thought I would give that a try. After I finished making my roses I popped my bouquet in the freezer for about an hour to set the icing. After the pink roses had set I added a few leaves to help cover the little empty spots between the cupcakes and then I was done.

You could also tie a little ribbon around the plant pot and attach a little Happy Birthday or Happy Mother’s day tag to it as well.