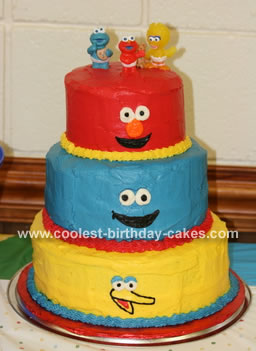 This Sesame Street cake was the second tier cake that I had ever made. I was amazed that it came out straight. The top tier is two layers of strawberry cake with red butter cream frosting. My son devoured it.

When I frosted the layers, I had a hard time getting the bright red color needed for Elmo, even though I purchased red food color gel. I ended up going to the grocery store and purchasing a large bottle of liquid red food coloring that had to be added to get the color from pink to red. It also darkened in color a bit once the icing had “set.”

I had originally planned on making cut-outs of each of the three characters on edible paper that I colored in with non-toxic markers, but at the last minute, I got the idea to just make their faces on the cakes. The characters are so recognizable, that it worked well. I bought the Sesame Street baby candles at a local party supply store, and placed them on top after the cake had been moved to its permanent location.

The cake was so heavy that I had to place it on a sturdy pizza pan to carry it.