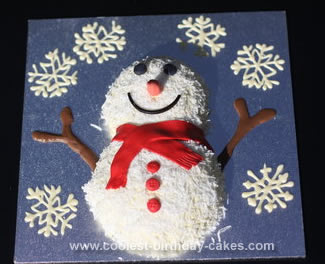 I decided to make a 2D Snowman Birthday Cake. I made it over several days. I used chocolate cake mix and divided it between 2 different sized pyrex bowls. Once baked and cooled I removed the cakes and sliced off the top domes. I cut out a portion from the bigger cake so as to fit the snowman head in snugly to the body. I then froze the cakes til the night before the party.

Another day I melted milk chocolate in a bowl over a saucepan of simmering water. Once the chocolate had cooled a bit I piped Ys to make the snowman arms. I made about 6 of these, having been warned they are fragile. (Actually only 1 broke, but the spare chocolate Ys did not go to waste!) I then refrigerated these til the day of the party.

Another day I melted white chocolate and piped the snowflake pattern. Again I refrigerated these til needed.

On the night before the party I made white chocolate and whipped cream icing. I positioned the cakes on the board and placed baking paper strips around the edges to make cleaning up after icing easier. I covered the cakes with a crumb coat, refrigerated it, then later did the second layer of icing. I then covered the cake with shredded coconut.

I coloured store bought white fondant red and made the scarf and buttons. I used a toothpick to make the button holes. Black fondant made the eyes. A strip of licorice made the smile. And some orange fondant shaped as a cone made the nose, this was attached with another toothpick.

On the day of the party I arranged the arms and the snowflakes on the board. I think this snowman cake turned out cute, was not too hard, and spacing out the workload made it less stressful and more fun!