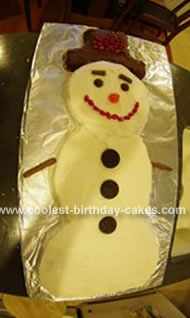 The key is not to make perfectly round circles for a snowman cake. And a frozen cake works best. Three adults and three children all crowded around a kitchen island works well. We found that we needed a table saw and a measuring tape to cut the piece of plywood down to size as we discovered at the last second that we indeed didn’t have a cake board big enough and… by the end we used a whole bag of icing sugar.

The icing was too stiff and started to break the edges of the cake and so we added a few drops of milk to thin the icing out. The adults worked on the snowman cake for an hour and the kids came in at the last second and carefully placed the eyes and noses (yes we bought two noses in case one of the kids ate a nose before we could get it on the cake!) and 3 buttons!

Don’t start this project without an industry sanctioned photographer who documented the entire process.