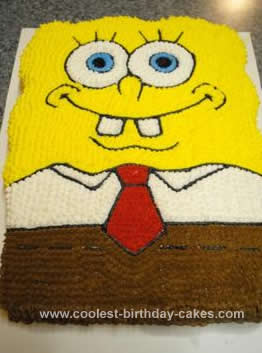 I made this Homemade Spongebob Squarepants Cake for my son’s 2nd birthday since he adores the character. I started with baking two boxes of yellow cake mix in a large cake pan (bigger than 9×13). I chilled the cake overnight for firmness and carved the edges of the cake with a pairing knife to give him the wavy effect just like the character.

I used Wilson’s decorator’s icing and covered the cake in a white base coat. Then, I used a toothpick and drew the features of the cake (it’s easier to correct mistakes with the toothpick rather than black icing! After you have the picture drawn, I used black icing to trace my work. From there I mixed each color as needed and did the yellow last. I used a small star tip to color in the areas of the cake.

This cake used icing colors: White, Black, Brown, Red, Blue and Yellow. Took approximately 5 hours to decorate with icing…if you have a fast hand and a helper to mix the icing colors and wash used tips after each color it might go faster. 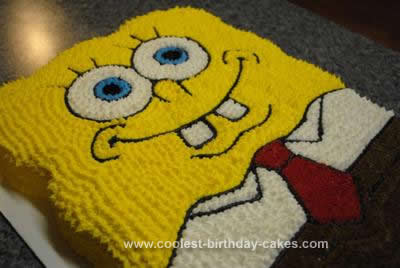 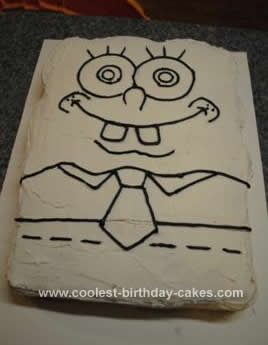