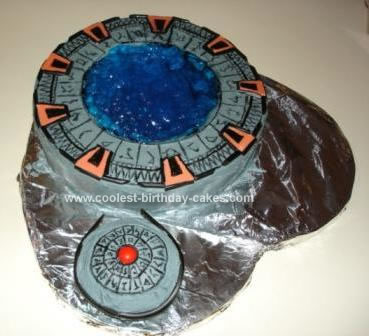 I made this Stargate cake for my brother’s birthday. He’s a big Stargate fan, as are we, and so I wanted to make him a special cake, as once you become an adult it seems the number of cool birthday cakes declines!

He was absolutely wrapt with his cake and we spent a good 20 mins just playing with the cake before we cut into it. Now I have some pretty hilarious videos which we will cherish for years to come.

The cake is a simple chocolate cake made in a ring pan which slopes inwards. So once the cake was flipped it created a small bowl for the Jelly center to sit in and was well supported. Numerous bowls of jelly were made to try and get a nice smooth ripple effect and not a lumpy jelly surface for the event horizon. This involved a lot of cling wrap and a lot of spilled jelly in the fridge! I settled on a bowl that was suitably shaped to the cake and wrapped cling wrap onto the surface of the setting jelly.

The cake was iced using Vienna Cream Icing and decorated with licorice and orange colored chocolate cut into triangles. I hand painted all the symbols with food colored gel. The tricky part was tipping the jelly onto a plate and then flipping the plate and jelly into the hole. It went as well as can be expected and didn’t entirely fall into place as hoped but at least it didn’t end up on the floor!!!.

The DHD (Dial Home Device) was an overfilled cup cake which spilled out just evenly enough to pass off as the required shape. The center button is a Jaffa.

We all enjoyed this cake very much and had Black tongues at the end to prove it!