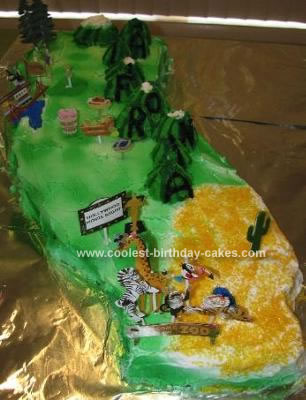 My 12 year old daughter needed a cake for her project on the State of California. I decided to carve the shape of California out of two 9×13 sheet cakes (used two boxes of cake mix per 9×13 pan so they were fairly tall).

I iced it with buttercream icing and sprayed the green areas with Wilton spray on icing. I left the desert area white and covered it with orange sugar crystals. I used blue icing to make the San Francisco Bay, Lake Tahoe and the Salton Sea.

I decided to add mountains and made them out of shortbread since I knew they would retain their shape while cooking. I iced them using two different colors of green icing and dotted a few on top with white icing for snow capped peaks.

The final touches on this State of California cake involved the use of cutouts to highlight significant landmarks in California. Unfortunately, I wasn’t the one that delivered the cake to my daughter’s class but the feedback I got was very rewarding. The kids in the class were very impressed.