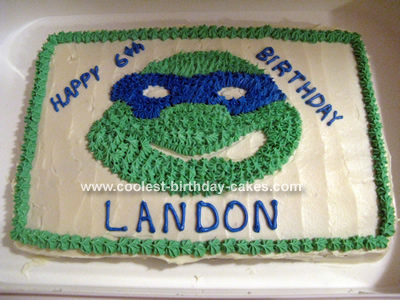 I have twins and this year for the first time, they didn’t agree on what they wanted on their on cake. Landon wanted a Ninja Turtle, Grayson wanted SpongeBob and Patrick (Look for it too, I submitted it to the site). So I did them both.

I did the same thing with the blue for the mask. I found an image using Google and saved it to my computer where I could enlarge it on my screen. While it was enlarged on the screen, I took a piece of plain white paper and put it on the screen and traced the image.

I then cut out the image, placed it on the cake that was already frosted white, and traced the outline of it white a toothpick where I had an outline to go by. I then loaded the green frosting into a baggie cut the tip off where I could use tip #16 for the decorating.

This has been my best cake yet using decorating tips, I was really pleased with myself and Landon was too!