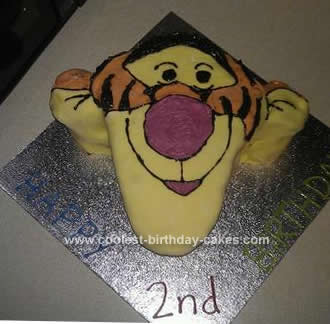 I’ve never been much of a baker, ask any of my friends or my husband! I’ve always blamed my oven! So after having my oven’s thermostat replaced I was determined this year for my son’s 2nd birthday that I WOULD succeed in making him a Tigger birthday cake. He is currently Tigger mad! I trawled the internet for inspiration and after seeing the cakes om this page I decided it was definately worth a shot!

I happened to have a chocolate orange cake recipe in a book I had so decided to use this but made double the amount but in 2 seperate bowls, I made one half orange flavoured and the other chocolate. I then got 2 square tins and added the mixtures bit by bit to each tin creating a marble effect just like Tigger! I then added then to the oven to bake. Once these were complete I removed them from the oven and allowed to cool.

Before starting the cake I had chosen a picture of Tigger and printed it off. I cut the shape out of his head minus his ears. Once the cake had cooled and was removed from the tin I placed the paper on the cake and cut around it with a sharp knife, I then did this for the 2nd cake. With the remaining cake I cut out his ears. I then made some butter cream, I spread some jam on one cake then spread the buttercream on top then placed the other cake on top. I then boiled some jam, let it cool then stuck the ears to the cake.

To ice the cake I bought ready to roll icing, I coloured it using colouring paste. I then used the picture of Tigger and cut each section out. I then rolled the icing out and put the paper on top and cut each section out. I then spread the whole cake with cooled boiled jam and placed the cut out icing onto the cake. I then used rest to pipe pink icing for his nose and mouth then a rest to pipe chocolate icing for his stripes. To put in the finer details I used a black icing pen!

I am so chuffed with myself. This is the 1st proper cake I’ve made and it was a roaring success! My son loved it and it tasted delicious!