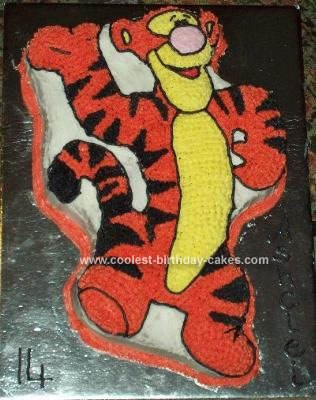 I bought a Tigger pan on Ebay, as it was listed as hard to find. I make cakes as a hobby, for both my children and other people’s and thought Tigger would be a nice addition to my pans. My daughter who turned 14 in 2009 asked me to make it for her birthday and after much ribbing about the cake not really being age appropriate, I gave in and made it for her.

The cake itself is golden butter cake, made to packet instructions. I believe I needed to make 2 mixes, though it didn’t use the whole lot, to accommodate the pan as it’s a reasonable size. Tigger is iced with solite icing, a substitute for butter cream, which is quite tasty and keeps well. To make the icing, I used 250g (1 cup) solite, 500g icing sugar and 2tbs milk. Beaten all together, it makes a nice sooth mixture to spread or pipe and it colors accurately, being a pure white mixture. I then divided the icing mix and colored each portion the colors the instructions directed and piped them in. A #16 star tip was used on all but the background, which was spread on. A #3 plain tip was used for outlining. A bit time consuming but fun to make and my daughter thought he was fantastic. She even had me deliver it to her classroom to share it with he class mates who all thought it hilarious that she wanted a Tigger cake at her age!