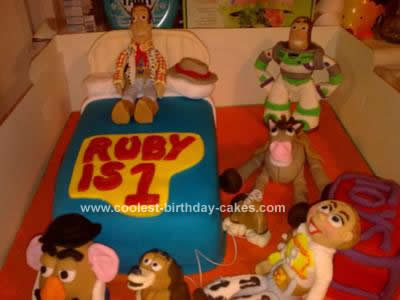 I made this Toy Story Birthday Cake Design for my daughter Ruby’s first birthday party. I started making this about 2 weeks before I needed it. I made Andy’s bed the sponge cake and the Toy box was cut offs from the sponge. I covered the bed in white fondant and then covered again in blue to make the bed cover, the head board is made from fondant that I imprinted using a ruler and stuck to the bed with edible glue.

I made the figures before I made the sponge as they took me quite some time as they were detailed and I wanted them to actually look like the characters. I used sugarpaste with a touch of gum trath to strengthen it to make everyone of them and they were all edible, to support the ones that stood up I pushed dry spaghetti through them for supports. I used icing pens for some of the detail on Jessie and Woody’s shirts and faces.

The legs on Woody snapped a couple of times and I had to start over. I made the coil of slinky the dog out of florist wire. I bought a Toy Story magazine and used that to copy the detail on the figures. I cut out the ruby one sign by hand. I was planning on adding some more of the characters but I ran out of space!!