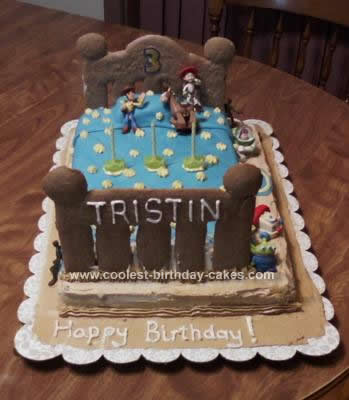 After checking out the other Toy Story cakes here, I came up with my Homemade Toy Story Birthday Cake Design. I used a single layer cake, Wilton pan 15x11x2, for the bottom or the floor of the bedroom. I frosted my cake board, 15×20, with tan frosting. I used another layer and cut it to size to make the bed. I used Wilton gel colors for the coloring. It can be pretty messy so I put the fondant to be colored into a gallon bag and mixed it in there until the colors were evenly distributed.

I used a favorite sugar cookie dough recipe, colored to brown, for the headboard and foot board. I made a paper pattern then traced around it with a knife. I used a sharp knife to cut out the openings, prior to baking. I rolled balls of dough to add the “tops” on the posts in addition to the original cutouts.

I didn’t care for the fondant from the store that I had used on a previous cake, so I searched and found a marshmallow fondant recipe. It was good and went onto the bed fairly easy. I had trouble cutting out the stars, so I used a rosette tip and put them on with buttercream icing. I used the buttercream icing recipe from Wilton.

The toys are from Wal Mart and I added little army guys around the bed. An extra piece of cake is the pillow with an extra piece of fondant over it for the spread. Before finishing the cake I cut the slices for the addition of the head and foot boards. Then I just pushed the big cookies into the slots until they were down as far as possible. The cake is too heavy so I put a stiff board under the whole thing for the transportation to the party.

I love this website and hope someone enjoys this cake. 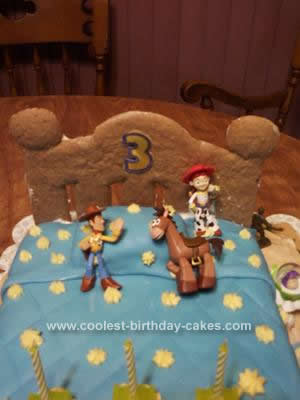 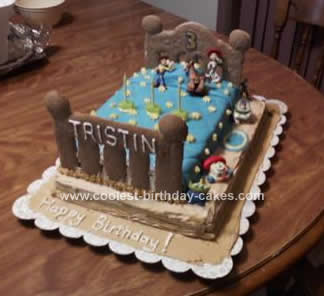 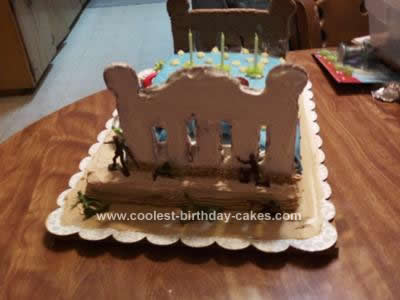