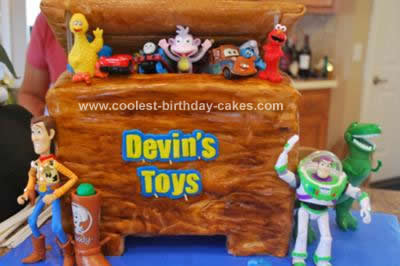 This cake is made out of two 9X13 cakes placed on top of a Styrofoam base. I knew I didn’t need that much cake for the party and also knew that it would be a structural nightmare. After getting the Styrofoam the way I liked it, I added a piece of cake board to the top so there wouldn’t be any concern about getting Styrofoam in the cake. I then covered the foam with Press and Seal. It seemed to stick the best.

After trimming the cakes, I covered the entire surface with buttercream icing. I tinted pre-made fondant brown and rolled it out big enough to cover the entire cake. I also rolled out extra to cover the cardboard piece that I used for the lid. After getting the fondant in place, I used the end of a spoon to make wood grain lines in the cake. After this I took Brown Gel Food coloring and mixed it with Vodka to “paint” the cake and create the stained wood effect. This does make the cake a little tacky, but it will eventually dry, just takes some time.

I then just decorated the Toy Box with all of my son’s favorite toys. We got lots of great compliments and people couldn’t believe that it was actually made of cake. 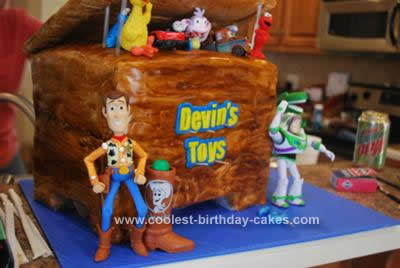 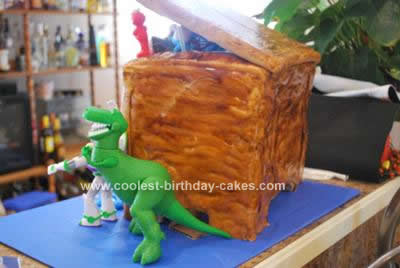