Nolyn, now 2 years old as of May 4, 2009 loves his train set he got this year from Santa. I decided months prior to his birthday that we were having a Train Birthday Party. I was determined but had no idea where to start. I found plenty of Thomas the Train cake pans and party favors but did want to have a “Thomas Birthday”. I began my search online and found coolestbirthdaycakes.com. Thanks a million!

Here I found the courage and ideas to make my son’s 2nd Train Birthday Cake, one we would all remember. We used several different ideas from pictures and then added some of our own as well. The descriptions about what to do helped as well. So, Thanks To ALL! My dad said, “Why don’t you just make a regular cake”? Well, while thinking about my answer to his question and why all of us moms, dads, grandparents, and guardians search for cool ideas for cakes I found my answer. Our children are our most precious blessings and year after year on one chosen day we celebrate with them. Being a mom is greater than I ever imagined.

I cherished making this cake and will take the time each year to make his birthday just as special as he is.

My advice would be to ask a close family member or close friend to tackle this cake with you. My sister was kind enough to help me and I could never thank her enough because it turned out so great. My mom also made her wonderful cream cheese icing which made our cake look great and taste yummy too. It was my sister’s idea to use the oval coffee table as our cake plate so that it could be moved from one place to the next with ease. While decorating we were able to sit the coffee table up on the dining room table so that we could stand.

At party time the height from the floor was ideal, smaller children could see all the details and candy. The greatest thing for me was when my son said “choo choo” and wanted to make it go. That was when I knew he identified with the cake. All the kids loved it. Nolyn even put on the conductor hat during the day. The adults could not believe how great it looked. In all we spent about 6 hours on the cake so I chose barbecue and finger foods because of their simplicity to complete the party menu.

After deciding what table to use we laid out the track with chocolate Twizlers and wafer cookies. We crunched up graham crackers for dirt between the tracks. I really enjoyed picking out different candies to use on the train for accents. We bought several (11) different aluminum bread pans in different sizes, one round green bean can, and 3-4 cake mixes in different flavors. The cakes were left to cool completely. We planned out which size cars would sit where and began to separate our icing into different bowls for color. My sister added the pond in the middle.

I had looked at several different ways to complete the engine. In the end I used the largest cake size for the bottom, put the round cake towards the front, then cut about a quarter off another large cake and placed it behind the round cake. The quarter piece then was made into a triangle for the very front bottom piece. The smoke stack was made from sickly marshmallows and the bottom of an ice cream cone. The top round part of the cone was used for the face on the front of the engine. We cut each of the cakes off a little so that they would sit flat on the train track.

We iced all the cars individually in the kitchen before placing them on the table. We then iced the Engine pieced and stuck the three pieces together with the icing. I cut out a picture of my son’s face and stuck it to the engine so he could be the conductor. We decorated the cars next while the icing continued to dry then we put the small Oreo cookies wheels on. Remember to put the wheels on after icing so that they can dry on there. We almost waited too late and they wanted to fall off. We had to re-ice them to get them to stick better.

The most important thing to remember is that it will be eaten with any luck regardless, and quickly. Just have fun and don’t worry about it being so perfect that you don’t want to sing happy birthday because you don’t want to mess it up. 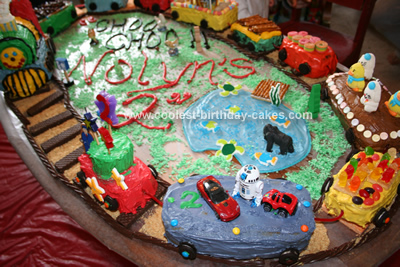 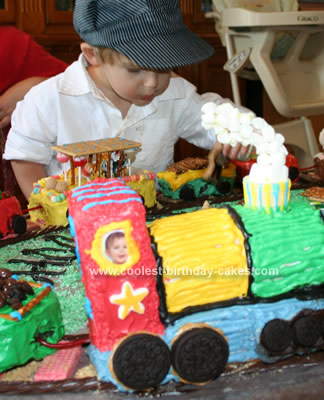