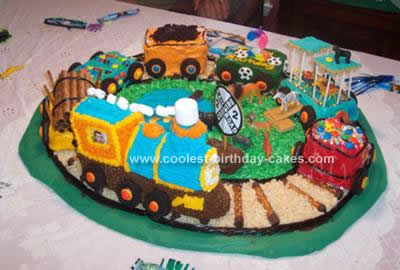 My son always talks about the choo choo train ever since he got to ride a train for the first time. So it just seemed like the perfect idea to make a Train Cake Design for his 2nd birthday.

At first, I was just going to do a flat train cake but then I found this website and my mind starting racing with ideas. I looked at all of the train cakes and then started to compile my ideas on paper. Thanks for all of the ideas. I don’t do anything on a small scale so I decided there would be seven cars that would complete a circle on a track. The cars that I decided to do were an Engine, logging car, M&M car, coal car, Happy Birthday with a #2 candle car, animal car, and a caboose.

I could not have done this cake without the help of my family members. It was so special that my family had a part in making this cake for my son. My mom, mother in-law, sister, aunts, and cousins all came to help. I think everyone had as much fun with it as I did. I loved making this cake and will take the time each year to make my son’s birthday just as special. I just don’t know how I can beat this one. It turned out way better than what I had imagined.

This is how we did it. We used four cake mixes: strawberry, chocolate, lemon, and confetti. For the engine, I used the Wilton 3D Train cake pan and for all the other cars we used loaf pans. The 3D cake pan took one cake mix and the rest of the cake mixes were baked in loaf pans. We decided to make some extras just in case and we did end up needing them. My son decided to take a hand full of one of the cakes that was sitting on the edge of the table. All of the cakes were made the day before and cooled in the refrigerator over night.

First, we started with the track. We used large stick pretzels, thick black licorice, rice crispies, icing for the pond, and coconut dyed green. I set the licorice in the hot July Texas sun for about 30 minutes to soften up so that it would bend easier. While the licorice was softening up in the sun, I cut the pretzels in half and dipped the ends in melted chocolate. We also used the melted chocolate on the bottom of the licorice and pretzels to lay down the track. This made the licorice and pretzels stick in place. The tracks were filed in with rice crispies to look like rocks.

After the tracks were completed, I drew the outline of the pond with blue icing and filled it in. I put one bag of coconut in a large zip lock bag and put some green food coloring in it and shook it until the coconut was covered completely. Then I placed the dyed coconut around the pond to imitate grass. Next, we started to decorate the cars. We used butter cream icing for all of the cars. The logging car was made with small stick pretzels, Pirouttes, and small black licorice. The coal car was made with two cakes with the middle part of the top cake cut out and filed with crushed Oreos.

On the animal car we used lolly pop sticks, plastic animals, and graham crackers for the roof and ramp. The caboose was made with one and half cakes. All of the cars were decorated and then placed on the tracks. After the cars were placed on the tracks, we put on the Oreo wheels with a dab of icing and attached the cars with thick black licorice. All of the wheels were made from Oreos with a dab of icing and an M&M.

Lastly, we decorated the center with plastic animals and gold fish. All of the cars were decorated with small black licorice, gel icing, peach fruit rings, sprinkles, marshmallows and M&Ms.

The most important thing to remember is to be creative and just have fun with it and don’t worry about it being perfect. It is all about making memories. I recommend having some family come over to help. I could not imagine having to tackle this by myself. Good Luck! 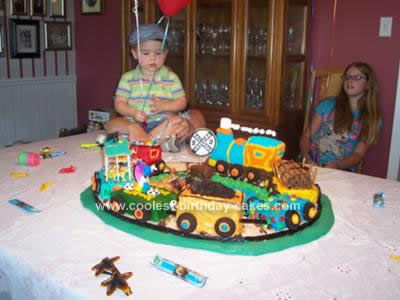