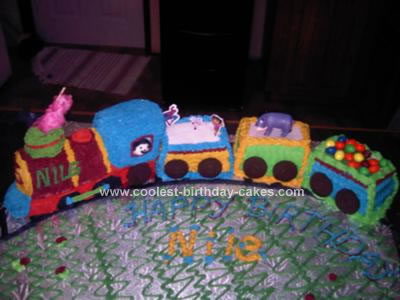 I made this Train Choo Choo Cake for Nile, my co- worker’s son. It was his 3rd birthday and because of his fascination with trains his mom thought it best to surprise him with a train cake.

I made 1 1/2 lbs of cake, and used a choo choo train cake pan. I used 6 cups of batter for that pan. I also used a loaf pan for the cars. I did a pineapple filling then cut the loaf into three to make three cars. I then used black butter frosting to ice the train track, then I iced the first car and placed it on the track, then the second then the third.

A metal spatula was used to transfer the cars to the track. Once those were in place I iced the engine and placed it on the track. At this point I used chocolate cookies for the wheels placing them 2 on each side of the cars and the back wheels of the engine. I used tip 14 to ice the four front wheels of the engine moving in a circular motion, the entire engine was frosted with tip 14 as well.

I did the final touches to the cakes while they were on the track. I used rolled icing to make the heads of a boy and a girl, they were placed at each window of the engine.

Finally I used a wooden kebab stick threaded with cotton candy for the smoke from the engine (this has to be done when the party starts or the cotton candy will melt). The cars can be filled with candies or cookies or toy animals etc. I used m&ms, a toy donkey and cartoon picks. Licorice can be used to attach the cars to the each other. I used a writing tip to do some zig zag design to represent grass then I wrote ‘Happy Birthday’ on the grass along with the child’s name. I also wrote his name on the train and number 3 at the front of the train. I dusted the 3 with a little edible glitter dust to give it that extra pop!

The birthday boy was totally blown away, he actually wanted to go for a ride in the train! 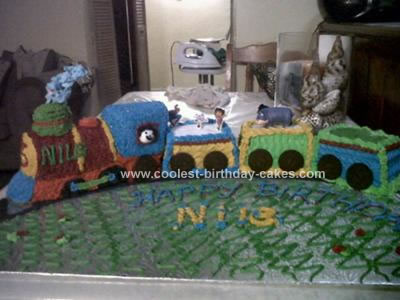