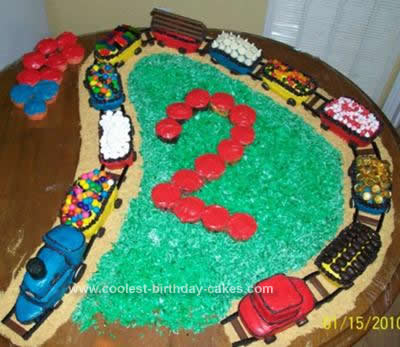 I made this Homemade Train Birthday Cake for my son’s 2nd birthday. I started by using just boxed cake mix. I made chocolate, strawberry, and yellow cakes. I baked them in the disposable mini loaf pans. Then I froze them to help the frosting stick better. In order to know which cake was which, I covered the chocolate cakes in blue frosting, the strawberry in red, and the yellow cake mix in yellow. I covered my entire kitchen table with saran warp and then got to work on frosting these cakes with homemade frosting, but honestly I think that store bought would work just fine. I would have to put the frosting in the freezer now and then so that it wouldn’t get to soft and runny.

I made the engine using 3 mini loaf cakes. I cut one in half and put it on the back with the flat side up. Then the other half I just cut a little off each side and rounded it and some off the bottom. Then the front piece I cut a triangle out of one on the other cakes, using the other half for the caboose. The smoke stack was just a big marshmallow covered in black frosting, and the light in front is just a small oreo opened up to just show the cream.

Once all the cakes were put in place and frosted I got to work on the details. I crushed graham crackers for the dirt under the tracks. The tracks were made out of kit kats, and black licorice. The wheels on all the cars were mini oreos and then on the engine I did use regular sized oreos for the 2 big wheels. Then I used black frosting and piped along all the cars. Then I topped all the cars with different candy. I used gumballs, little marshmallows, peanut and regular m&m’s, jolly ranchers, those pirouette sticks, white chocolate kisses, jelly beans, valentines day mini kisses, rollos, and root beer barrels. The grass in the middle is just coconut died green.

I had a blast making this cake. It took me a total of 9 hours to decorate this cake. I took a lot of time trying to smooth out the frosting. Since I have never used fondant and didn’t want it to look like my 2 year old helped me frost the cakes. It was a huge hit with everyone. One thing I have to say is honestly freeze the cakes, it just works out so much better if you are going to frost them like me.

Have fun and hope you enjoy.