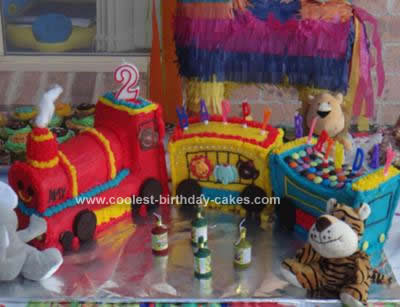 I made this Homemade Train Birthday Cake Design for my daughter for her 2nd Birthday as the theme was “Jungle”. At first I wasn’t sure what to make, but then I saw a few ideas from different websites and books, and decided to create this.

I made 4 cakes, 2 of which were made in a deep square tin, and the other 2 were in a loaf tin. For the cylinder effect on the steam engine, I used a jam roll that I purchased from the store. Basically for the steam engine, I cut the square cake in half and placed the jam roll on one half and stood the other on the back and joined it together with some icing.

The first carriage was made by cutting the square cake in half and joining it together with butter icing and shaping it to make a round top. I piped all the details around it and added the silver shiny balls around the top to give it a rounded effect. The other carriage was made by joining 2 loaf cakes together with icing. I cut a groove in it and lined smarties in it, to give it a coal carriage effect, and piped all the details on it with butter icing.

Originally I was going to make the jungle animals out of fondant, but because I had never used fondant before, I didn’t take the risk and decided to use the chocolate/candy moulds from “Wilton”. They were made a week before by melting and colouring white chocolate to make the lion and elephant, and melted chocolate for the monkey.

On the cake board I piped with chocolate icing a railway track and placed the 3 carriages on it. The icing I used was just butter icing and for the smoke effect, I stuck cotton wool on a toothpick and stuck it in the funnel part. The wheels on the steam engine were 4 mini Oreo biscuits and 4 large Oreo biscuits and for the carriages the large Oreos were used and stuck on with icing.

It took me a whole day to decorate it, but in the end it was a hit at the party and everyone loved it, especially my 2 year old! 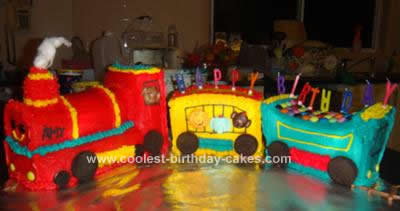 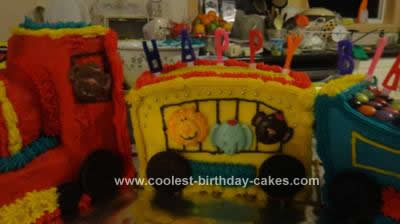