I started this train choo choo cake with the Wilton site for the engine! I used their pan and pretty much followed their directions for how to decorate. The only thing I really did differently was instead of trying to hold wheels on with frosting is I used toothpicks. It looked much nicer and held the candy canes on. I tried with frosting but they kept falling off.I also used red licorice instead of black.

For the cars I used the Wilton mini loaf pan. I made a coal car with small chocolate candies I found at a local candy shop. I thought black rock candy would’ve looked better but could only find it online and my husband was about to kill me for how much this was costing so I didn’t get it but I think crushed Oreos would look fine too!

I made two bear cars. I used large gummy bears and pretzels for cage. I decorated a large graham cracker for roof. I also thought animal crackers/cookies would be cute here. I made two log cars. I used large pretzel rods for logs and tied them with licorice strings. I also made a clown car. I found the clown heads at a local craft store (Joann) and the balloons were dumdum lollipops.

For the boards I took two 13X19 cake boards and covered them with honey (very thin layer but all over). I used black licorice and kit kat bars for the tracks and filled in spaces with rice krispies. I used coconut flakes that I dyed green with food coloring for the grass. For the lake I picked out jelly beans that I thought looked like rocks to outline and filled in with blue frosting and wrote happy birthday in. I also put in a few goldfish!

To get the idea for board layout I traced the engine and loaves onto paper after they were baked and cut them out. That way I could lay it out and decide how to set up the tracks and pond.

I tied all the cars together with red string licorice. 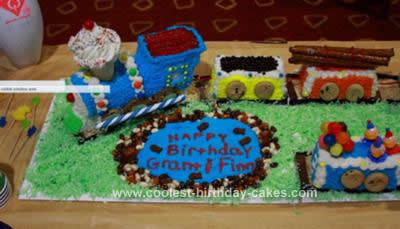 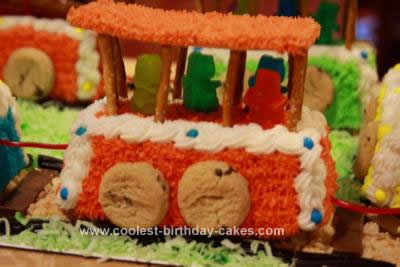 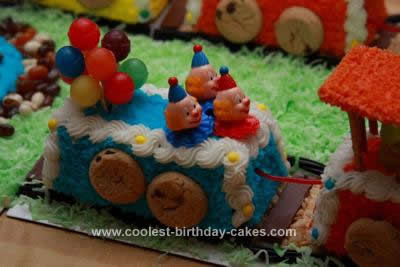