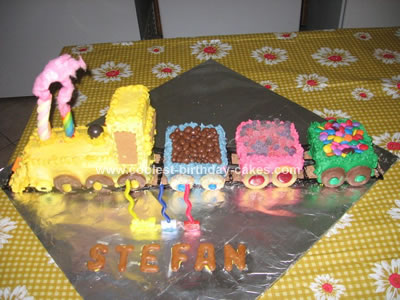 My grandson wanted a train-with-trucks birthday cake for his 3rd birthday party at his playgroup. He wanted a blue truck for the boys, a pink truck for the girls and a green truck for the adults. I planned the cake long before the time and looked for suitable sweets I could use at every shop until I got what I needed.

I bought 2 packets of cake mix and baked the cake in three loaf tins. Then I cut and pasted the engine and 3 trucks as I wanted it to be. I colored the butter icing in the different colors and iced the train as he wanted it to be. I used a star tip to decorate all the edges of the engine and trucks. For the wheels I used different kinds of biscuits.

For the yellow engine and the blue and green trucks I iced a Smartie of the same color in the middle of each wheel and I bought biscuits with a red jelly circle in the middle for the pink truck’s wheels. For the railway line I used thick black liquorice and separate Kitkat rods with crumbled flakes in between the rods. I also used thin black liquorice between the engine’s wheels. For smoke from the engine chimneys (marshmallow and candy sticks) I iced pink candy-floss on top of it. I also used a black Niggerball, other sweets, wafer biscuits and silver balls to decorate the engine and put three different kinds of small sweets on the train’s different trucks.

I fished the cake off with his name in alphabet biscuits and his birthday candles in a train engine and trucks in the same color as his cake. He and his friends were absolutely thrilled with the cake. 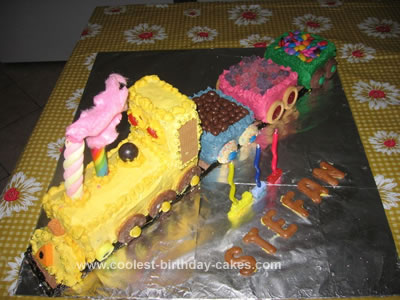