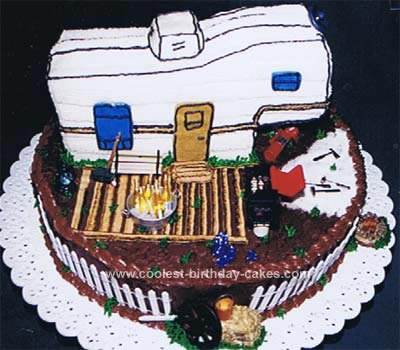 This Travel Trailer Retirement Cake I made for a friend-neighbor of my mother’s who was retiring. He was planning on spending a great deal of his retirement time at their travel trailer near my mom’s lake house. I had several ideas to start with but I kept going back to the idea of a 3D travel trailer resembling their actual trailer.

The original trailer was 30 feet long so I was not able to do an exact replica but this does a pretty good job of it. He was notorious for having lots of tools and “useful stuff” piled around the trailer.

I used a chocolate butter cream icing for the ground, I have no clue what tip I used. The desk was created with a flower tip with different colored brown icing in the same bag. The siding on the trailer I used a large basket tip. The trim was just a standard round tip. The windows, satellite dish and door was made with fondant. The gravel driveway is granulated sugar. All the extra tools, beverages and fence were donated by a friend who stopped by a hobby store on her way to the party.

I had a lot of fun creating this cake and there was nothing left. 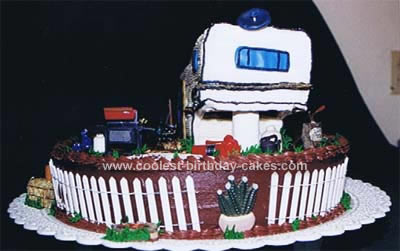