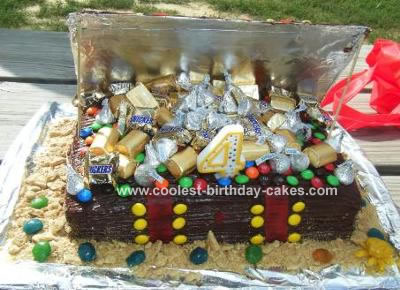 I made this treasure chest cake for my daughter’s fourth birthday. I found the idea on this site. The bottom is two 9X13 chocolate cakes. I put them in the refrigerator for a couple of hours to cool before frosting. I used store bought chocolate frosting. I frosted both cakes and used a plastic fork to make the wood grain look.

The top of chest is a piece of cardboard wrapped in foil. I frosted the back and did the wood grain on it as well. I put the cakes and the top in the fridge overnight so they wouldn’t melt.

I covered the top of the cake with M&M’s before putting the candy on it. I left the candy wrapped because we had a child with a peanut allergy, so she couldn’t eat the Snickers. I put the majority of the wrapped candy on before I put the top on.

To get the cardboard to stay in place, I put a small hole on either end of the bottom of the cardboard and one in the middle. I put three wooden skewers 3 inches long through the cardboard and into the back of the cake. I used two 7 inches skewers to prop up the front off the cardboard. I was really worried that I was going to have problems getting the top to stay up, but it didn’t so much as tilt.

After putting the top on, I put the rest of the wrapped candy on the cake. The sand around the bottom of the cake is a package of crushed graham crackers. When I bought the strawberry fruit by the foot, I bought a variety pack that included fruit gushers and fruit roll-ups. I used a package of gushers for the jewels, and my sister made the crab with a fruit roll-up.

I was concerned with how difficult this cake would be to make, but it was the easiest one I’ve ever done. The kids LOVED it!