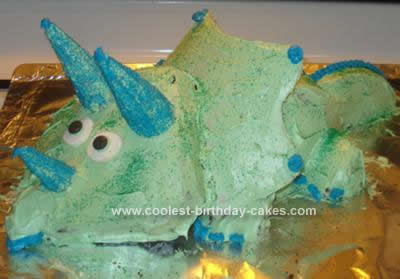 Time to put together this Homemade Triceratops Birthday Cake: about 3 hours (baking not included).

To make this triceratops cake I used 2 box cake mixes (chocolate was the birthday boy’s preference) and 2 containers of whipped butter cream frosting that I added green food coloring to. I baked the cakes in 2 round pans, and 1 square pan and had some batter left over to make about 7 cupcakes (which I made into dinosaur eggs). I baked the cakes the day before and set them in the refrigerator.

Putting the Triceratops pieces together was fairly easy. I cut the 2 round cakes in half, and then set 3 halves upright next each other to make the body. The 4th half I cut in half long ways again and set it behind the body to make the tail. With the square cake I cut all 4 corners off to shape a head. The 4 corners were used as the legs. After the pieces were put together it was ready for frosting. (This part takes the longest) I also cut the ends off of two pointed ice cream cones to use for the top two horns, then I cut the tip of a third cone off for the horn above the nose. I covered the horns in frosting and covered them in sprinkles.

For the eyes I sliced the ends off a marshmallow and put them in place. Then I stuck on 2 brown M&Ms with a dab of frosting. For the finishing touches I used blue frosting to outline the spine, add toenails, the mouth on the beak, and tips to the cones. Then lastly I lightly covered the triceratops in sprinkles.

1) Set the cake in the refrigerator for at least an hour before you attempt to cut the pieces.

2) When putting the 3 halves together for the body, put frosting between them to hold them together.

3) Do a crumb coat over the cake before applying the colored frosting. Yes, this will make the entire cake making process longer, but you will be happy with the results in the end. (I skipped this part and had a difficult time applying frosting over the unfinished edges such as around the head and legs).

4) I used cereal box cardboard and found that after a while it began to droop. I would suggest using thicker cardboard if you don’t want it to droop.

5) To keep the ice cream cones in place I inserted a straw into the cake.

I used a star tip to cover the cupcakes in frosting and set a large marshmallow on top. I used tweezers to apply sprinkles (the large flat circle kind). I also used the leaf tip to add decoration around the marshmallow. Now you have a dinosaur egg hiding in the grass! 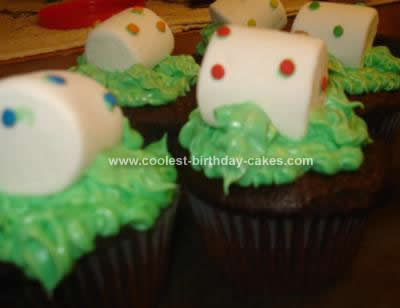 Coolest Triceratops from Harry and the Dinosaurs Birthday Cake